Sarah Alogaili is a senior studying to earn her B.A. in biology health and society from the University of Michigan, school of literate, science, and art. Her research focuses on understanding the association between race and asthma development in neighborhood area in the united states, especially Delray.

Over the summer of 2017, I volunteered at Delray Neighborhood House Center. Delray is a small neighborhood located on the southwest side of Detroit, and it is about 15 minutes away from Detroit downtown. Delray's residences came from diverse backgrounds and tend to have low socioeconomic status, due to the devastating economic status of the area. Thus, the residents of the neighborhood either worked in the factories or inherited their houses. The neighborhood center is near fisher highways and surrounded by two factories, one of which includes the Detroit water and sewage. The neighborhood considers to be one of the most polluted places in Michigan. Because of the fumes and pollution from the factories, it has the high rates of asthma and cardiovascular-related illnesses. When I was working with the children, I noticed that most of them were expiring asthma's symptoms, similar to coughing, wheezing, and throat irritations. Asthma is a chronic disease caused by the constriction of the airways in the lungs, which are responsible for the movement of air in the lungs. The image of the little kids with inhalers is immersed in my memory. This issue is threating our next generation and is considered to be a public health issue, where it affects over 6.2 million children and adolescents in the United States. Therefore, actions in offering accessible and affordable health care, as well as enforcing zoning laws are necessary to reduce such an illness. 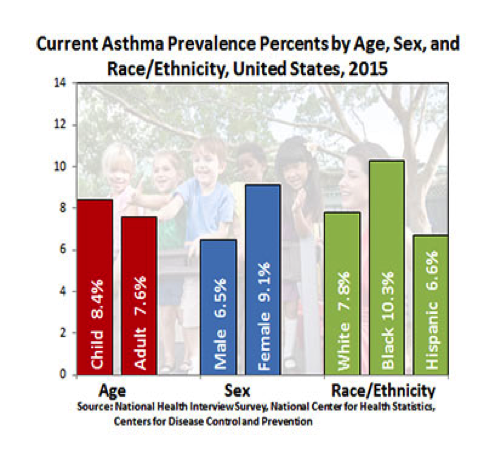 From my research, I discover that there is an association between races an asthma levels. For instance, African Americans tend to have higher asthma compared to the other races. African Americans have higher asthma rates relative to whites, with an increasing trend of these rates for African Americans. Hispanics have lower odds than whites of having an asthma diagnosis. However, asthma development is highly dependent on the region; large Puerto Rican and Dominican Republican populations report higher rates of asthma than Hispanics living in other states. After understanding, the accusation of asthma and race, I became interested to learn what causes such an illness. Evidence supports that pollution from factories and car emissions increase the asthma levels. Outdoor pollutants can trigger asthma and may play a role in asthma pathogenesis. Non-whites are more likely to live in areas with elevated levels of air pollutants due to factories and car emissions. Similarly, indoor allergens are higher in urban households. These allergens can include cockroaches, which are associated with an increase in asthma morbidity. Other causation behind asthma is access, access to care and treatment, which may be caused by transportation difficulties and financial burdens. 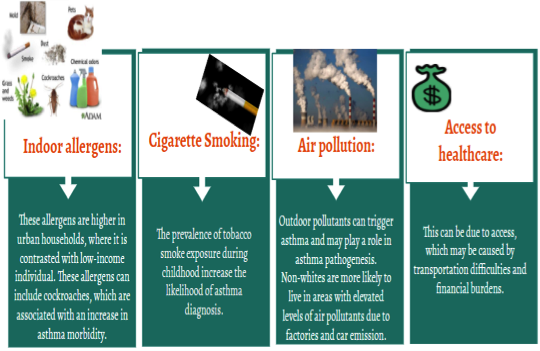 After understanding the association between race and asthma, followed by the causation behind such an illness, we have to understand ways to reduce this public health disease. As a society, we need to act to reduce the high incidence rate, especially when we are talking about the next generation. On a policy level, bridging the disparity gap is necessary. Where there should be available clinics that are offering health care for patients suffering from asthma. These clinics should also follow the implementation of clinical practice guidelines for asthma to reduce the of asthma-related health disparities among at-risk groups. Likewise, zoning laws are essential in protecting the neighborhood from the high level of pollution, which does not only affect the environment but also harm the health of the residents. There should be a strict application of zoning law that controls the commercial use of land in order to prevent oil, manufacturing, or other types of businesses from building in residential neighborhoods. On a personal level, I want to learn about the research opportunities that investigate ways to reduce the incidence rate of asthma and treat the high prevalence of this illness.