A Research Brief by: Amani Echols


Every child deserves the best start in life. Our babies are our future... If 90% of mothers exclusively breastfed for 6 months, as advised by the World Health Organization, nearly 1,000 excess infant deaths would be prevented annually (Bartick et al., 2016). If these mothers then continued to breastfeed for a year, 2,619 maternal deaths would also be avoided (Bartick et al., 2016). "Breastfeeding is the natural biological conclusion to pregnancy and an important mechanism for the continued normal development of the infant," ("Baby-Friendly USA," n.d.). Human milk is species-specific making it superior to other feeding options providing the perfect nutrition and immune protection to the infant. Maternal benefits of breastfeeding include reduced risk of breast and ovarian cancer later in life, postpartum depression, diabetes, and heart disease (Gartner & Eidelman, 2005). Beyond the individual, breastfeeding has many public health benefits by decreasing the incidence and/or severity of transmissible diseases by the child and chronic diseases. Furthermore, at the community level, there are family, environmental, and economic benefits of breastfeeding. For example, if the same 90% of US families mentioned previously breastfed exclusively for 6 months, the United States would save $13 billion per year in health care expenditures (Bartick et al., 2016). In result of the immense societal impact breastfeeding has, infant feeding should not be considered an individual, lifestyle choice but rather as a basic health issue, as the American Academy of Pediatrics stated in 2012. Therefore, provider advocacy and support for breastfeeding in health facilities is essential for the achievement of this public health objective.

As demonstrated in The Surgeon General's Call to Action to Support Breastfeeding 2011 and HealthyPeople2020, increasing breastfeeding rates and duration is a frequent goal of public health professionals and organizations. The United States' breastfeeding rate is remarkably low compared to other developed nations. That said, U.S. Black women have even worse breastfeeding rates compared to women of other races in the U.S. (Figure 1). In addition to the benefits of breastfeeding previously discussed, increased participation in breastfeeding among the African American population will decrease the infant mortality disparity, foster mother-child bonding which could contribute to stronger familial ties, healthier relationships, and emotionally healthier adults improving the health of the African American population (Reeves & Woods-Giscombé, 2015). 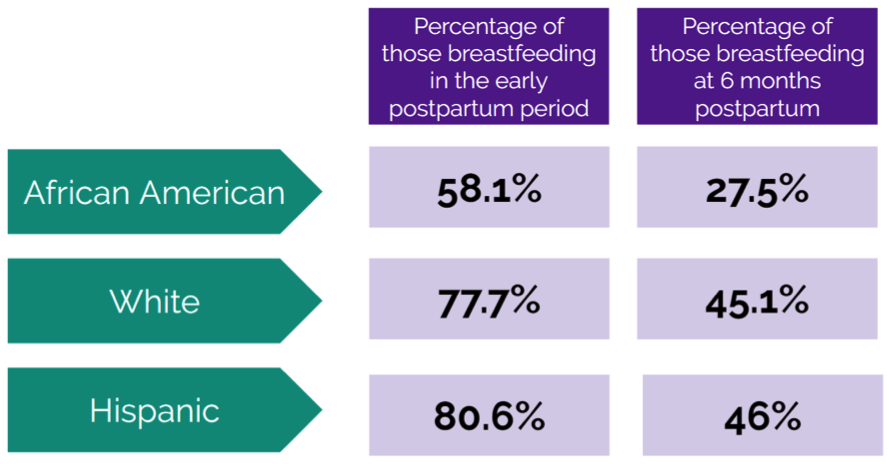 The Baby-Friendly Hospital Initiative (BFHI) was introduced as a global effort to implement practices and policies that protect, promote, and support breastfeeding. This initiative outlines Ten Steps to Successful Breastfeeding that, if implemented, provide support and education to mothers. To accomplish this goal, hospitals or birthing centers commit to bettering their infant feeding and mother/baby bonding policies, training, and practices that align with proven to be effective evidence-based policies and procedures. Evidence-based practices integrate individual clinical expertise, the best scientific, systemic research, and the patient perspective (Duke University Medical Center, 2017). Though literature demonstrates that Baby-Friendly hospitals have increased breastfeeding rates overall compared to non-Baby-Friendly hospitals (Merewood, Mehta, Chamberlain, Philipp, & Bauchner, 2005; "One Hospital at a Time Overcoming Barriers to Breastfeeding," 2011; Philipp et al., 2001), there is still a disparity between Black women and women of other races. It is important to explore numerous social, cultural, and environmental factors that affect an individual's infant feeding decision-making processes and to study the implications of these findings for clinical practice and research to eliminate current disparities in rates of breastfeeding.

There are many benefits to implementing evidence-based programs to promote breastfeeding; however, cultural adaption is an essential action to consider when adopting an evidence-based intervention for racial/ethnic and other minority groups (Marsiglia & Booth, 2015). Evidence-based interventions are often designed and tested for middle-class, White Americans with the assumption that evidence of efficacy with this group can be transferred to non-majority populations, which may or may not be the case (Marsiglia & Booth, 2015). Evidence-based practices that lack "relevance to the needs and preferences of a subcultural group, even if the intervention could be administered with complete fidelity, would exhibit low levels of effectiveness," (Castro, Barrera, & Steiker, 2010). Cultural adaption aims to address challenges and opportunities to enhance the effectiveness of interventions by grounding them in the lived experiences of the target population insuring a more optimal fit without comprising the integrity of scientific merit (Marsiglia & Booth, 2015). When the adaption is done systemically, optimal benefits can be achieved as well as increased community commitment to sustain the intervention overtime (Castro, Barrera, & Martinez, 2004). The Baby-Friendly initiative and policies stress the role of healthcare professionals in protecting, promoting, and supporting breastfeeding, but does not embody the environmental, social, and cultural understanding of infant-feeding decisions and behaviors. Breastfeeding should be encouraged as a cultural norm requiring family and societal support.

Adapted health interventions should aim to alleviate identified barriers to breastfeeding and recognized influencers of breastfeeding behavior that are specific to Black women experiences. Following an extensive literature review, an emerging theme arose. Social support has been found among several studies to be a significant predictor of intention to breastfeed among pregnant African American women (Spencer & Grassley, 2013). Positive social support has the capability to foster self-confidence and self-efficacy in the mother's ability to breastfeed. Women who receive breastfeeding support from the father of their infant are more likely to breastfeed (Reeves & Woods-Giscombé, 2015). Maternal grandmothers also influence infant-feeding practices. The transfer of knowledge, information, attitudes, beliefs, and practices occurs often within the family unit. Moreover, family breastfeeding history is an important predictor of breastfeeding initiation. Knowing a family member or friend that has breastfed in the past is a protective factor and significant predictor for breastfeeding initiation (Spencer & Grassley, 2013). There is also a positive relationship between exposure to breastfeeding and a mother's confidence to breastfeed (Reeves & Woods-Giscombé, 2015). Furthermore, a mother's decision to breastfeed is often influenced by the perspectives of persons in their social networks (i.e. family members, friends, co-workers, public health nurses, and church members) (Asiodu, Waters, Dailey, & Lyndon, 2017). Normalizing breastfeeding and creating role models that exhibit breastfeeding is important in the Black community. Creating positive visual experiences and memories related to breastfeeding and producing role models is crucial. In sum, lack of support and encouragement from family members, health care providers, and peers is a theme that African American women report for decreased initiation and duration of breastfeeding (Spencer & Grassley, 2013). Nevertheless, community and health facility resources and programs can create a supportive environment ideal for lengthening breastfeeding duration.

Baby-Friendly initiatives that mold its care to the demands and narratives of Black women will more accurately and efficiently ameliorate and eliminate the unique barriers and influencers that contribute to their infant-feeding decision making. One way to make Baby-Friendly policies more equitable for Black women is to add an eleventh step to the Ten Steps to Successfully Breastfeeding: "Educate family, friends, and other support persons about the benefits and management of breastfeeding". The objective of this additional step is to garner extra family support for breastfeeding mothers, in alignment with the pre-existing Ten Steps. Having social, specifically familial support is a protective factor for African American women to prolong breastfeeding. This education should begin early in pregnancy and extend in to the postpartum period. Education to and support for family, friends, and support persons should be provided via peer to peer communications. The implementation of these practices should mirror the psychological, social, cultural, and societal needs of African American mothers.

In summary, breastfeeding is the "cornerstone of infant" health having many benefits for the mother, child, and community. Evidence-based practices, such as the Baby-Friendly Hospital Initiative, often fall short in catering to the tailored biographies of African American women. "Interventions should address cultural and social challenges...and connect hospital, community, peers, family, and family support," (Johnson, Kirk, Rooks, & Muzik, 2016). Providing services specific to the narratives of Black women is the difference between equal and equitable Baby-Friendly policies. "Future interventions geared towards this population should consider the intersectional experiences of Black women to foster more culturally inclusive education," (Asiodu, Waters, Dailey, & Lyndon, 2017). Culturally grounded work is needed to overcome this public health challenge.

Dr. Ebbin Dotson, PhD, MHSA, Christopher Clarke, MPA, and Karen Aguirre, MPH advised me while writing this blog and provided valuable insights. This work could not have been completed without the guidance of the new Health Equity Leadership Pipeline Collaborative (The Collaborative) at U-M School of Public Health and the U-M Summer Enrichment Program (SEP) through the U-M School of Public Health's Health Management and Policy Department. I would also like to acknowledge St. John Providence's Maternal Infant Health Program (Infant Mortality Program) staff and its director, Karen Gray-Sheffield, MA, for introducing me to Baby-Friendly Hospitals and enforcing the importance of breastfeeding and maternal, child, and community health.