Most diseases stem from the complex interplay of genes and the environment.

If diseases were caused by single genes, it might be simple to design targeted interventions. But most diseases result from the complex interplay of genes and the environment, and that makes things tricky, says Bhramar Mukherjee. 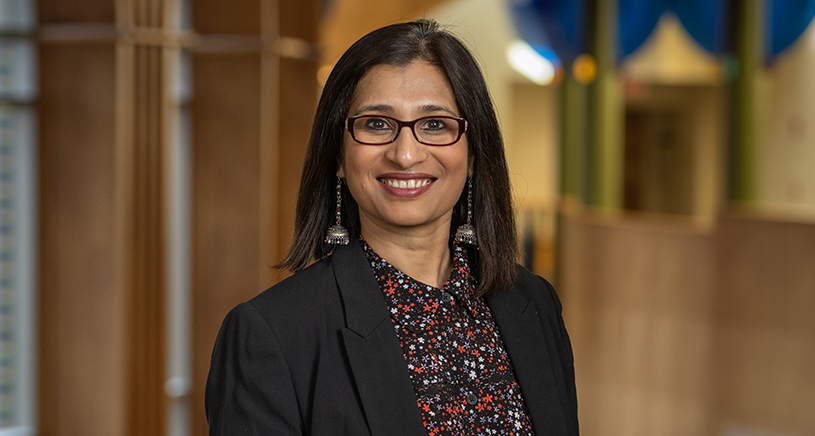 “How do you define your environment? Is it internal? External?” the SPH biostatistician asks. Never mind the challenge of trying to understand how your environment interacts with genes and genetic markers—the task Mukherjee has set for herself.

In separate collaborative studies of the molecular epidemiology of colorectal cancer and of lead exposure in children, Mukherjee is developing new statistical methods for characterizing the gene-environment interaction. Biologists can interpret genetic material and identify or hypothesize about the metabolic pathways by which genes and environment interact, says Mukherjee, but they need statistical model-building, or “clever estimation strategies,” to help understand and detect the exact nature of the complex interplay between the two.

Earlier statistical models for estimating gene-environment interaction were sometimes built on the assumption that genetic and environmental factors acted independently of one another, but as Mukherjee points out, these factors are quite often interdependent. Certain genotypes, for example, affect the way the human body processes tobacco, and researchers suspect this may in turn alter the risk of colon cancer in smokers who have that genotype.

In combination with specific genetic mutations, some drugs, too, can lose their efficacy, or worse, inflict harm, so it’s equally important to understand how drug-gene interactions function.

With Nilanjan Chatterjee of the Division of Cancer Epidemiology and Genetics, National Cancer Institute, Mukherjee has devised new statistical methods to “relax the assumption of gene-environment independence while building efficient estimation strategies to detect the interactions between genes and the environment.”

Because scientists are now working with such enormous data sets, it’s possible to be much more confident about the genes and genomic regions that are risk factors for particular diseases. Researchers are now looking increasingly at the environmental factors that, in combination with genetic factors, can cause disease.

The ultimate goal is to design targeted intervention strategies. “If you’re carrying a particular mutation, and you know this particular environmental exposure could be especially bad for you, then you try to intervene as early as possible,” says Mukherjee.

Send correspondence about this or any Findings article to the editor at sph.findings@umich.edu. You will be contacted if your letter is considered for publication.