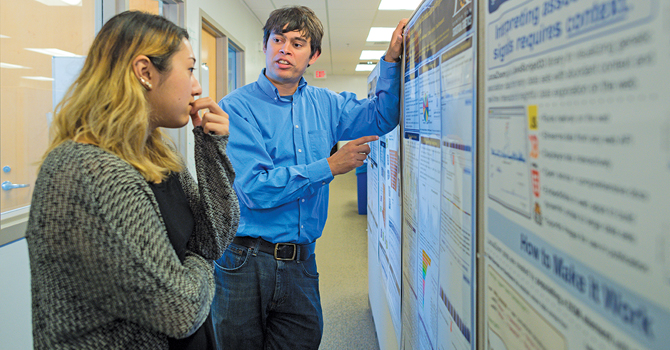 When Gonçalo Abecasis and team created Genes for Good, they were banking on the fact that social media was a great platform for getting people to share their genetic and health information with scientists in exchange for some insight into their DNA. And they were right.

The program launched in March 2015 already boasts 70,000 participants. If it continues to grow at the current pace and funding holds up, Genes for Good could top a million users within the next two years. "It took us a year to get 10,000 participants, nine months to get the next 10,000 and now it's almost 10,000 every month," said Abecasis, chair of the School of Public Health Biostatistics department and Felix E. Moore Collegiate Professor of Biostatistics.

Then there was the one-week bump of 10,000 when someone posted a positive review of the program on social media platform reddit. Participants sign up for the program via Facebook and answer a series of health questions. After they have completed a number of surveys over a period of time, they are sent a spit kit to be returned for analysis, if they choose. Currently, about 43 percent of those who sign up for the program send back kits.

It takes a while for the analysis to be completed, particularly with the way the program has exploded in the last year, but within about 3-4 months participants are sent their raw data and an ancestry report. U-M does not do health trait analysis of the data.

"It's really exciting that so many people are willingly participating in research," said Anita Pandit, research computer specialist in the Biostatistics department. "The reason we went to Facebook was so that our advertising was sort of built in for us. The hope was that people would tell their friends and spread the word."

That's exactly what Danielle Fausz-O'Brien did. The Kentucky resident has become an advocate for the program, creating a Facebook group to help link participants in Genes for Good with resources that can help them understand their raw data, such as gedmatch.com and codegen.eu.

"I am always up for sharing my DNA as I have a rare medical condition and perhaps doing something like this may help people like me in the future," Fausz-O'Brien said, adding that she also hopes to find more "DNA cousins" by encouraging participation in the free service.

"I have been researching genealogy for a long time. DNA tests are out of reach for some, so by helping you and spreading the word for your program, it may help me find more DNA matches and might solve my genealogy mysteries."

Fausz-O'Brien said she has participated in other DNA testing with commercial companies and Genes for Good is comparable, but she wishes the ancestry results could be more detailed. Abecasis said that is a goal for the program in the near future, along with speeding up the return of results and the addition of a genetic browser to allow users to explore the data more directly in the app.