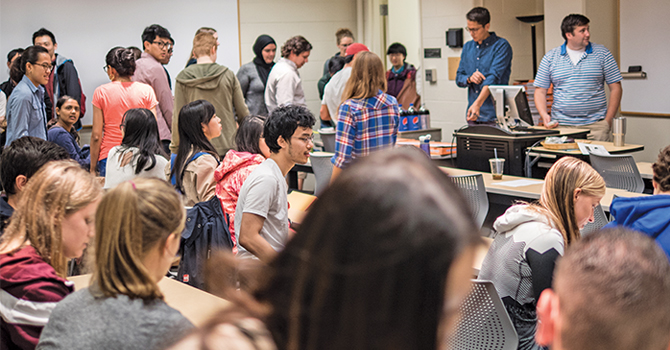 Statistics in the Community

"We knew there were several ways to analyze the data that we collect," says Doyle, whose Ann Arbor-based nonprofit provides housing and other support to high-risk youth and their families. "But we didn't know how to crunch some of the numbers, nor did we have the capacity to do it ourselves." She was connected with U-M's chapter of STATCOM (Statistics in the Community). Based in the School of Public Health, the program offers the expertise of statistics graduate students—free of charge—to community organizations.

"From start to finish and anywhere in between, we can help," says Evan Reynolds, a doctoral student in the biostatistics department and STATCOM's current president. STATCOM students perform a wide range of services gratis, such as helping create surveys or analyzing data that an organization has recorded itself.

When Doyle met with STATCOM, she had a particular question in mind: Could Ozone House more efficiently schedule the volunteers who help staff a 24-hour crisis line? For each call, a volunteer records data points, including the call's length, time of day, and purpose. Traditionally, the crisis line has included three volunteers working together in four-hour shifts.

Doyle's group wanted to know if there were any patterns to when calls come in. If so, then they might be able to increase their number of volunteers during busy periods and downsize during slower periods. Such information, says Doyle, would help minimize volunteers' idle time, so that they "feel like they're really giving back in a meaningful way."

In addition to answering Ozone House's question, STATCOM students hope to build an app that will allow Ozone House staff to plug in variables such as date and time and then receive customized staffing recommendations. "They've been terrific," says Doyle of the students. "They ask great questions. They're professional and smart."

"Our goal is to create opportunities and to encourage the students to be involved in this," says Michael Elliott, who serves as STATCOM's faculty coadvisor along with Cathie Spino, his colleague in the biostatistics department. Says Elliott, "STATCOM provides a great opportunity for students to work with real life data, to have an impact in the community, and to encourage the kind of skills that are not so easily taught in the classroom."

The program's community partners are, in their own right, making key contributions to the region. For example, STATCOM has worked with county health departments and Latino Family Services in Detroit, both of which focus on public health. STATCOM has also assisted local libraries, Ann Arbor's Leslie Science Center, and other organizations dedicated to improving quality of life.

STATCOM originated as a volunteer organization at Purdue University in 2001. The organization expanded its reach with a grant from the American Statistical Association in 2006 and now includes over a dozen chapters across the country. Elliott helped found Michigan's chapter of STATCOM in 2006, serving as the original faculty advisor. Since its inception, the Michigan chapter has had approximately 100 student volunteers from around campus—Michigan Public Health biostatistics majors, statistics majors from Rackham, and survey methodology majors from the Institute for Social Research. The program is project-based, with students working in groups of four or five people. At any given time, roughly 15 students are actively involved in a project. Currently, over 75 students are on STATCOM's email list.

"Data and quantitative expertise have become increasingly valued over the last decade," says Elliott. "I think places understand and see a value in what we're offering more than they used to." Still, one of the group's challenges is finding the right community organizations to partner with. Some organizations find STATCOM through word-of-mouth. Other times, STATCOM reaches out to them. Explains Elliott, "We're looking for organizations that wouldn't have enough money for research and wouldn't typically know how to tie in with a group with our skills."

STATCOM has increasingly been collaborating with U-M's Ginsberg Center, which cultivates mutually beneficial partnerships between communities and the University. Recently, the Ann Arbor Area Community Foundation approached the Ginsberg Center for assistance creating a survey to measure quality of life in older adults and caregivers in Washtenaw County with a focus on vulnerable seniors.

Within six months, STATCOM designed a survey, and social work students—volunteering through the Ginsberg Center—administered over 600 surveys in community settings, such as senior centers. Then STATCOM analyzed the data.

"The results confirmed what we thought was happening. That was the power of it," says Jillian Rosen, the foundation's vice president of community investment. The survey showed that seniors living in low-income areas with lack of access to transportation and stable housing have a lower quality of life than the general public within Washtenaw County. The foundation is currently using the data in allocating grants to local nonprofits. Eventually, they plan to make it available to the community at large so that it can be accessed by senior-serving organizations as well as policy makers and other stakeholders.

"The STATCOM team was just fabulous," says Rosen. "They brought ingenuity and expertise to the project, and they did it all pro bono. We could never have afforded the market rate to engage such highly talented people. Their work really enhanced the value of our project."
STATCOM at Michigan is growing in size, and Reynolds, its president, believes it can lead as an example for other chapters around the country. He would like to further the group's cross-disciplinary work, perhaps reaching out to students in other departments at Michigan Public Health. "In an ideal world, it may be that we'd have groups of five students, and maybe three of them are biostatistics students and a couple are epidemiology or nutrition," he says.

Both Reynolds and Elliott attribute STATCOM's longevity and growth to the enthusiasm of students. "Most students don't see this as extra work," says Reynolds. "They see this as something they want to be a part of. They want to help, want to use their ski

Michigan Is My Home

Each year in Washtenaw Country, thousands of people experience homelessness. As a first-year undergraduate student in 2015, Hussain Ali wanted to help—but there weren't any student organizations dedicated to supporting homeless individuals. Early in his sophomore year, he decided to start one: Michigan Is My Home.

Ali shared his idea for a new student organization with a classmate, Payton Watt, who decided to join the effort. Together, Ali and Watt went out into the community and asked homeless individuals what kind of support they needed. "We try to get familiar with the population through community engagement and field research," says Ali, now a junior pursuing a bachelor's degree in Public Health Sciences. "We go into the field and talk with people. We actively listen before we serve."

Based on their early community conversations, Ali and Watt organized pilot programs, creating and distributing care packages and soliciting feedback. "We learned a lot of eye-opening things," says Ali. When people think about care packages, daily necessities immediately come to mind—food, warm clothing, hygiene supplies. But he wasn't expecting reusable water bottles to be such a popular item. Another unexpected favorite: chocolate. "It can make people happy that day," says Ali, and "that's part of our job."

Soon after the student organization was formed, Ali and Watt decided to participate in the optiMize Challenge, a four-month program run through the University that offers students an opportunity to develop and pitch a project related to social innovation. In the spring of 2017, optiMize awarded the team $11,000 in seed funding to expand their student group into a non-profit organization. Within six months of forming Michigan Is My Home, the team established a 10-member board and a 30-member base of student volunteers. To enhance its reach, they established partnerships with Groundcover News, local shelters, and student organizations such as MKnit, whose members use sustainable yarn to sew gloves, hats, and scarves for the care packages.

Now, Michigan Is My Home makes biannual distributions of 100-200 care packages for individuals experiencing homelessness. Sustainability is an important element for the organization, so Michigan Is My Home members gather left-behind reusable water bottles from campus gyms, and then sanitize them at the dining halls to use in the care packages. Additionally, each month, the group donates "transitions bins" to Alpha House, an Ann Arbor-based organization providing temporary shelter, food, and support services to families. These bins are stocked with household essentials to support a family's transition into permanent housing.

Michigan Is My Home fits within the broad framework of public health, says Ali. Nutrition, hygiene products, housing—they all contribute to individual and community health.

The sentiment is shared by Emily Compton, a second-year graduate student in the nutritional sciences department. Compton is the community service and mentorship chair for Women in Health Leadership, a group of roughly 50 Michigan Public Health students dedicated to empowering women to overcome gender barriers and become leaders in healthcare and beyond.

"Community service is a key pillar in being a good leader," says Compton. Last year, one of the group's most successful events was a feminine hygiene drive collecting supplies for Neighborhood Service Organization, based in Detroit. The organization, which provides shelter and support services to homeless individuals, was in need of feminine hygiene products—items that are often overlooked when people make donations.

"Once I learned there was a need for feminine hygiene products, it was easy to get Women in Health Leadership on board," writes Serena Bidwell, last year's community service and mentorship chair. Bidwell also reached out to campus sororities, giving presentations and collecting donations. In the end, the group donated over 6,000 items—so much that Neighborhood Service Organization has to store extras in the attic.

Women in Health Leadership relies heavily on the organizational skills that students learn studying in the health management and policy department, says Compton, as well as on the health communication skills discussed in health behavior and health education courses. "As an organization, we pride ourselves on learning what the community needs in order to organize effective ways to get the product and the services to the right people."

This year, the group plans to undertake some of the same outreach projects as last year. In addition, Compton hopes to initiate new semester-long and year-long projects. Looking to the future, she says, "We're just getting started."
—Sara Talpos