Faculty members at the University of Michigan School of Public Health are leading the way in analyzing environmental and social factors along with epigenetic data to identify people and communities at risk for preventable diseases. Eventually, this research will lay the groundwork for targeted, precision health interventions and policies, social support, and communications that create better health outcomes both for individuals and on a population level.

“The University of Michigan is at the forefront of epigenomic research,” says Dana Dolinoy, associate professor of environmental health sciences and nutritional sciences at the School of Public Health. In fact, Michigan is one of just a few universities to have an Epigenomics Core, which provides epigenetic analysis, resources, and services to researchers inside and outside the university community. It allows researchers who may not be as knowledgeable about epigenomics to tap into the expertise of colleagues like Dolinoy to enhance their own research. 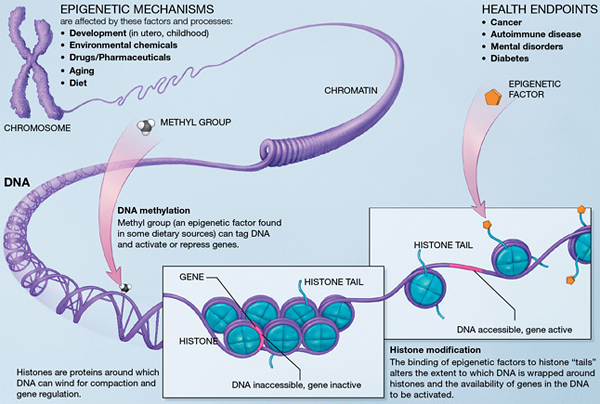 If you think of your genes as your body’s hardware, your epigenome is the software that tells them how to work. “It’s essentially the instruction book on top of the genome,” Dolinoy says.

Each of the roughly 250 different cell types in the human body has a different epigenome. Without changing the genetic sequence of the DNA, those epigenomes activate and suppress genes through DNA methylation and histone modifications. The epigenome acts as sort of a dimmer switch that can promote a gene to turn on slightly, turn on significantly, or turn off completely.

And while genes are hard-coded at conception, the epigenome is dynamic and changes throughout prenatal development and life.

Several factors can change your epigenetic mechanisms, including environmental chemicals, medications, hormones, nutrition, and development and aging. Since epigenomic changes impact gene expression, they can also impact your health.

Because they change how your genes function, they can trigger conditions like cancer, diabetes, autoimmune diseases, and mental health problems.

“I think there’s a huge opportunity for epigenetics in precision health,” Dolinoy says. “Through these efforts, we can identify people at risk. Once the biomarkers are there, then we can start screening people.”

But there’s still a lot of work to be done. “There are two big challenges,” Dolinoy says. “First, we need to figure out how to identify—on a population level—who is at risk for diseases triggered by epigenomic changes. Then we need to figure out what we are going to do about it. Even though the epigenome is potentially modifiable, we don’t have the tools yet.”

How a Mother’s Nutrition Impacts Her Baby’s Epigenome

Dolinoy is especially interested in better understanding how a pregnant mother’s diet can affect a child’s lifelong health.

Using a mouse model, Dolinoy and her team look at exposures to bisphenol A (BPA), phthalates, and lead and their effect on epigenetic gene regulation, reproductive development, and risk for metabolic syndrome—a cluster of conditions that includes high blood pressure and blood sugar, excess belly fat, and abnormal cholesterol and triglyceride levels.

This research is part of a series of three complementary studies led by Michigan Public Health researchers within the Children’s Environmental Health Center. The studies build on one another to better understand how obesity, sexual maturation, and risk for metabolic syndrome are affected by the interaction of endocrine-disrupting chemicals with diet during pregnancy and puberty.

“We hope to determine the role of epigenetic programming caused by early exposures in increasing risk for disease and impacting reproductive health,” Dolinoy says. “In addition, this study will help inform the development of new epigenetic-based diagnostic tools, screening strategies, and precision treatments for diseases in humans.”

The Role of Your Social Environment on Your Health 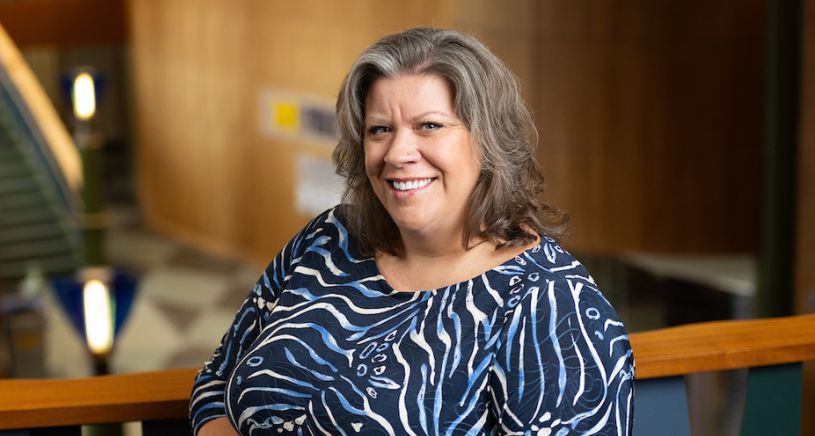 Environmental exposures aren’t the only things that can impact the epigenome. Stress and other social factors also play a role.

Social epigenomics, a field that has just emerged in the last few years, looks at the epigenome as a bridge between social exposure and disease outcomes. The epigenome holds information about all your past exposures—both physical and social—and is shaped by those exposures.

“We’re becoming more and more acutely aware that health and disease are influenced by a wide range of factors,” says Jennifer Smith, assistant professor of epidemiology at Michigan Public Health. “It starts from genetic and biological factors and expands all the way out to social exposures and political structure.”

Smith has studied the impact of neighborhood and social environments on genes related to stress and inflammation. In one study, she and her colleagues found a correlation between poor neighborhood conditions—such as safety concerns, low social cohesion among neighbors, and poor aesthetic quality—and DNA methylation in 18 genes related to stress reactivity and inflammation. Other qualities of neighborhoods including lack of food availability or exposure to environmental toxicants could also influence methylation of these and other genes.

In the future, these deeper understandings of how genes and environments interact might also help us develop new interventions, including better public policy and neighborhood planning, to help people stay healthier. Belinda Needham, assistant professor of epidemiology at Michigan Public Health, is beginning work on a new study that looks at racial disparities and cardiovascular mortality through the lens of social epigenomics.

“We know that certain racial groups have a higher risk for cardiovascular mortality, so we want to see if there are patterns of DNA methylation that vary by race that can help explain why we see those disparities,” Needham says. “We think it’s possible there are connections, but we don’t really know, because this type of work has never been done. It’s very exploratory.” Needham and her team are taking a genome-wide approach to this project rather than looking at a few specific genes. “We want to look at every single methylation mark and compare people who died of cardiovascular disease to those who didn’t and see if there are differences,” she says.

Looking at that many data points can pose its own challenges, so Needham is partnering with colleagues in the biostatistics department. Together, they will develop innovative modeling approaches to deal with the very high volume of data and determine how best to address questions about DNA methylation as a mechanism that helps explain racial disparities in cardiovascular health.

“It’s important that we don’t think about precision health as being just about genetics,” Smith says. “The era of personalized medicine was all about genetics, but now we need to expand that thinking to include the ways that the social and the biological interact.

“Making people healthy is about more than just drugs and treatments. Sometimes it's cleaning up toxicity, improving the social environment, or developing other approaches. Studying the epigenome is a new way to learn about how the body is reacting to the physical and social environment.”