In November 1999, 94 members of American Public Health Association (APHA) sent a request to the Executive Committee for designation as the Community–Based Public Health (CBPH) Caucus of APHA. The members of the proposed caucus were convened by the Community Health Scholars Program, a postdoctoral program sponsored by the W.K. Kellogg Foundation which highlights community–based participatory research (CBPR) and relationships between academe, community, policy, and public health practice.

The Caucus was officially recognized in 2000. In 2001, the first sponsored sessions and events of the CBPH Caucus were held at the APHA Annual Meeting in Atlanta, GA. In November 2004, APHA officially adopted a policy statement submitted by the CBPH Caucus: 2004–12 Support for Community–Based Participatory Research in Public Health. 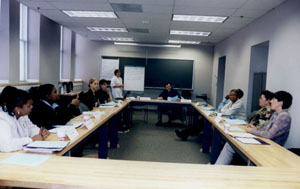 The idea for the CBPH Caucus was born in this room Baltimore, 1999

Each year, we meet face–to–face at the APHA Annual Meeting. With support from the Kellogg Foundation, we provide scholarships for travel to community members and youth who are actively involved in the Caucus and/or present through our Caucus at APHA. The Caucus sponsors a full schedule of presentations and posters. We join with a local organization to co-host a reception in the community to celebrate and honor local community activism.

Since we were established in 2000, we have been fortunate to have the support of the W.K. Kellogg Foundation. Funding from the Foundation has supported our scholarships, meeting activities, and a wonderful Caucus support staff and committed volunteers that help make everything happen! Funding from Kellogg ended November 2012 after APHA.

Beginning in 2010, the Steering Committee began facilitating discussions throughout all our groups about the impending end of Kellogg funding and our need to transition to self-sufficiency.  We formed the Ad Hoc Committee on Fund Development (AHCFD), which is charged with identifying ways to maintain Caucus activities. This includes identifying sources of revenue and volunteer resources. The general membership was involved in transition deliberations through an online survey in June 2012 that had a 40% response rate.

In July of 2012, several actions took place based on these two years of planning. The Steering Committee adopted a new governance structure, which can operate basic Caucus functions without staff. An NIH R13 proposal for conference funding was submitted (and funded in December) by the AHCFD for the 2013 APHA Annual Meeting.  A guide, “Suggestions for Fundraising for APHA”, was developed based on tips from Caucus members and posted on our website. Yearly CBPHC membership dues were instituted beginning in 2013.

In December 2012, the CBPH Caucus and Community-Campus Partnerships for Health (CCPH) signed an agreement to support each other’s work and collectively advance our shared goals of health equity and social justice through authentic community-institutional partnerships.   Through our partnership, members of both organizations will have enhanced opportunities for professional development, networking and advocacy.

In November 2013, the CBPH Caucus organized a full schedule of events: a Learning Institute, business meetings, community reception, and 12 professional sessions.  Sessions include 6 oral, 3 round table, and 3 poster sessions that focus on different aspects of conducting, evaluating, and disseminating community-based participatory research and including academic, community, and youth presenters. With funding from the National Institute on Minority Health and Health Disparities of the National Institutes, the Caucus supported 29 leaders from community-based organizations, including 4 youth, to attend our learning institute and present at our sessions.