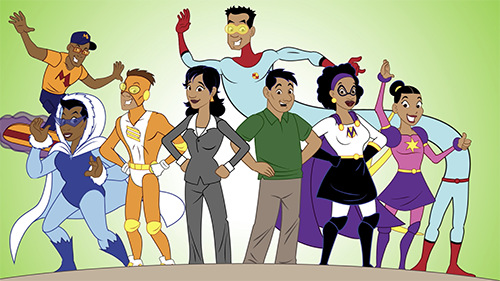 Ms. Magnificent can stop a moving train before it hits a family of ducks but sometimes asthma gets the best of her, sending this superhero off to the emergency room. She gets a rescue inhaler at the ER and a “super-sized bill.” Ms. Magnificent has no insurance and the costly treatment is just a short-term fix.

Marvelous Man saves kittens from trees with his super stretch powers, but when his back acts up from all of the contortions, he doesn’t seek care. He’s a new immigrant who doesn’t think he’s eligible for health insurance, and he can’t afford to pay out-of-pocket because the superhero business doesn’t pay that well.

Kid Cartwheel uses her acrobatic prowess to save a turtle from a bus but sprains her wrist in the process. Having just turned 19, she’s no longer covered by the Children’s Health Insurance Program. Like many people her age, Kid feels invincible and, therefore, doesn’t think she needs health coverage.

But everyone needs health insurance—even superheroes.

This key point and the message that there are people available to help navigate the complex system of health insurance enrollment are takeaways from several short superhero videos and a web resource, created through a partnership among several Detroit area agencies and the University of Michigan, and funded by the National Institute for Health Care Reform.

“Health insurance is very complicated and the Affordable Care Act is very complicated, but we worked as a team to decide on a simple message,” said Minal Patel, John G. Searle Assistant Professor of Health Behavior & Health Education at Michigan Public Health.

“Using storytelling, which is an effective way to raise awareness, we created characters who resonated with different sorts of situations most people would experience, such as transitioning off of one plan to another, managing chronic disease, and changing your doctor. We embedded particular learning points into all of these stories.”

While the Affordable Care Act cut the number of uninsured by more than half since its inception, millions in the United States remain without coverage. At the time the study started, metropolitan Detroit had a large population of uninsured residents.

“When we looked at the research, it was historically marginalized racial/ethnic communities, that continued to remain uninsured,” Patel said. “There was still a disparity between whites and other communities in terms of those actually taking advantage of the ACA and all it had to offer.”

Patel, Richard Lichtenstein, co-investigators Barbara Israel and Peter Song, and others from their research team worked with a steering committee that included representatives from health and social service agencies in Detroit, to gather feedback on how to address some of the gaps in health care coverage that impact low-income, historically marginalized racial/ethnic communities the most.

“We worked with a number of groups to try to create the knowledge we would need at the community level to understand the uninsured situation in the Detroit metropolitan area, and what we could do to change that,” said Lichtenstein, professor emeritus of Health Management and Policy. 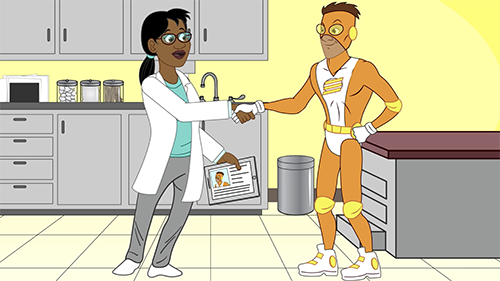 The participants in the project were largely Black/African American, Arab-American/Middle Eastern descent, and Latino/Hispanic. The research team asked participants about their knowledge, beliefs, confidence and behavioral intentions with health insurance navigation and care-seeking prior to, and six and nine months after engaging with the videos and website.

Michigan Public Health has a 22-year history of working with organizations in Detroit through Community Based Participatory Research partnerships, mostly organized under the Detroit Community-Academic Urban Research Center (Detroit URC).  The leaders of all of the organizations in the partnership noted the importance of the partnership’s basic premise—to conduct research that equitably involves the community from the start. The team used focus groups and surveys developed by all partners to ask residents of the community to help identify the problem, create the concept and evaluate the program at multiple points, including offering feedback on the videos.

“Before there was ever a video series, they liked the focus groups. They liked being asked, ‘what do you think?’" Joslyn Pettway, a graduate of the School of Public Health and chief program officer at Covenant Community Care, said about her organization’s clients. Covenant serves 20,000 patients annually at six sites, each location unique in terms of the profile of those served.

Pettway said the team gathered a lot of feedback to make sure the lighter presentation of the information would be taken seriously. “You have to be careful about condescending, but there’s so much information out there that you needed something different,” she said about the video series. 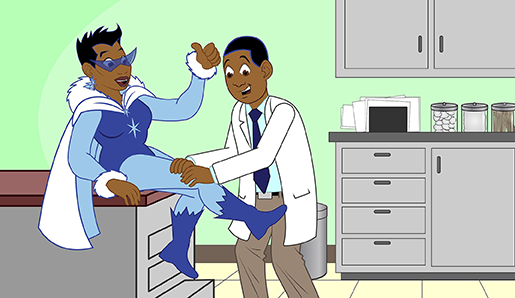 Pettway said early confusion with healthcare.gov and a delay in getting Michigan’s health care exchange up and running, contributed to some frustration.

“Now we’re trying to sell health insurance again and it’s like when you go to a restaurant and get bad food. You are reluctant to go back again. Expanded Medicaid in particular gave our patients more options for health insurance, now we just needed to get them to trust the enrollment process. ” Pettway said.

Madiha Tariq, deputy director of the ACCESS Community Health & Research Center, said establishing confidence in the system is critical for the Arab-American community she serves. They understand the health care system better than most, the research showed, but they have difficulty, particularly in the current political climate, trusting institutions.

“Many of our immigrant and refugee clients have sensitivities. They come from war-torn areas and have a mistrust of government,” she said. “They are afraid to share personal information.”

She said this is where direct involvement with the research is crucial.

“The most humane and right way to work with communities is to use the community-based participatory research approach, she said. “They need to know this research is for their benefit.”

The real heroes of the video series

Normally, when we think of superheroes we expect them to save the day. They all still do. But in this case, the champions of the series are the assisters and navigators, the people who help the heroes figure out how to navigate health coverage.

“I love the characters. I love what they represent, and I love the messages they have, but the navigators were the ones that, to me, make the most impression because now I know who to go to for help, if I had any one of those situations,” said Lidia Reyes-Flores, executive director of Latino Family Services.

Her organization serves a large number of newly arrived immigrant families who often face confusion regarding legal status and health insurance in the U.S., which is explained in Marvelous Man’s scenario.

Margaret Meyers, MD, medical director at Mercy Primary Care Center, said her organization tries to help people navigate the system but the number of choices in the marketplace is daunting, and people don’t understand terms like coinsurance, deductibles and premiums. 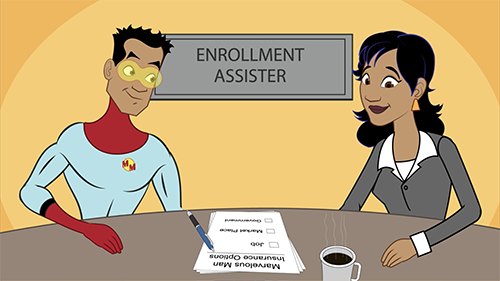 “I think this program’s really going to help people as they go to choose insurance to really choose the thing that’s going to be best for them,” Dr. Meyers said.

Prior to the ACA, the patients Mercy Primary Care Center saw were all uninsured. Since then the mix is now three-quarters Medicare or Medicaid and one-quarter uninsured.

Many of the remaining uninsured patients would likely relate to Ms. Chill, whose chronic arthritis doesn’t get attention because the Superhero Bureau she works for does not provide health insurance.

“The uninsured we see are primarily low-income and working, so their job doesn’t provide health insurance or provides it at a cost that’s not tenable for them. Or they can’t afford to purchase it on the marketplace,” Meyers said.

A Mercy Primary Care Center client and study participant Tondra Lewis said the videos are entertaining and make learning about the importance of health insurance interesting. For her, the emphasis on preventive care really resonated.

“To stay alive. To make better choices out of life. To eat better. To have a better heart. Those are the most important parts,” said Lewis, who has convinced her son about the importance of enrolling. She’s still working on her sister, who paid a tax penalty this year for not signing up.

Like Lewis’ son, most research participants at the nine-month follow-up said they intended to change a health or insurance navigation behavior. Although they did not appeal to everyone, most reacted positively to the videos, citing one or more learning points related to health insurance. The interventions’ impact was highest with Latino/Hispanic respondents, who showed improved knowledge, beliefs and confidence with health insurance navigation and care seeking.

The team began to create the program before the 2016 presidential election and had to adapt as parts of the ACA were changed. But Patel said they feel that have created an adaptable website that can stand the test of time.

The videos are available in Spanish, Arabic and English at insuringgoodhealth.org.

“We named the intervention Insuring Good Health because we want folks to feel confident in engaging with health insurance and health care in general, over their lifetime,” Patel said. “Our team is motivated to continue our work together. There are many complicated aspects of health care navigation that our team wants to make more accessible to everyone. So a sequel is needed.” 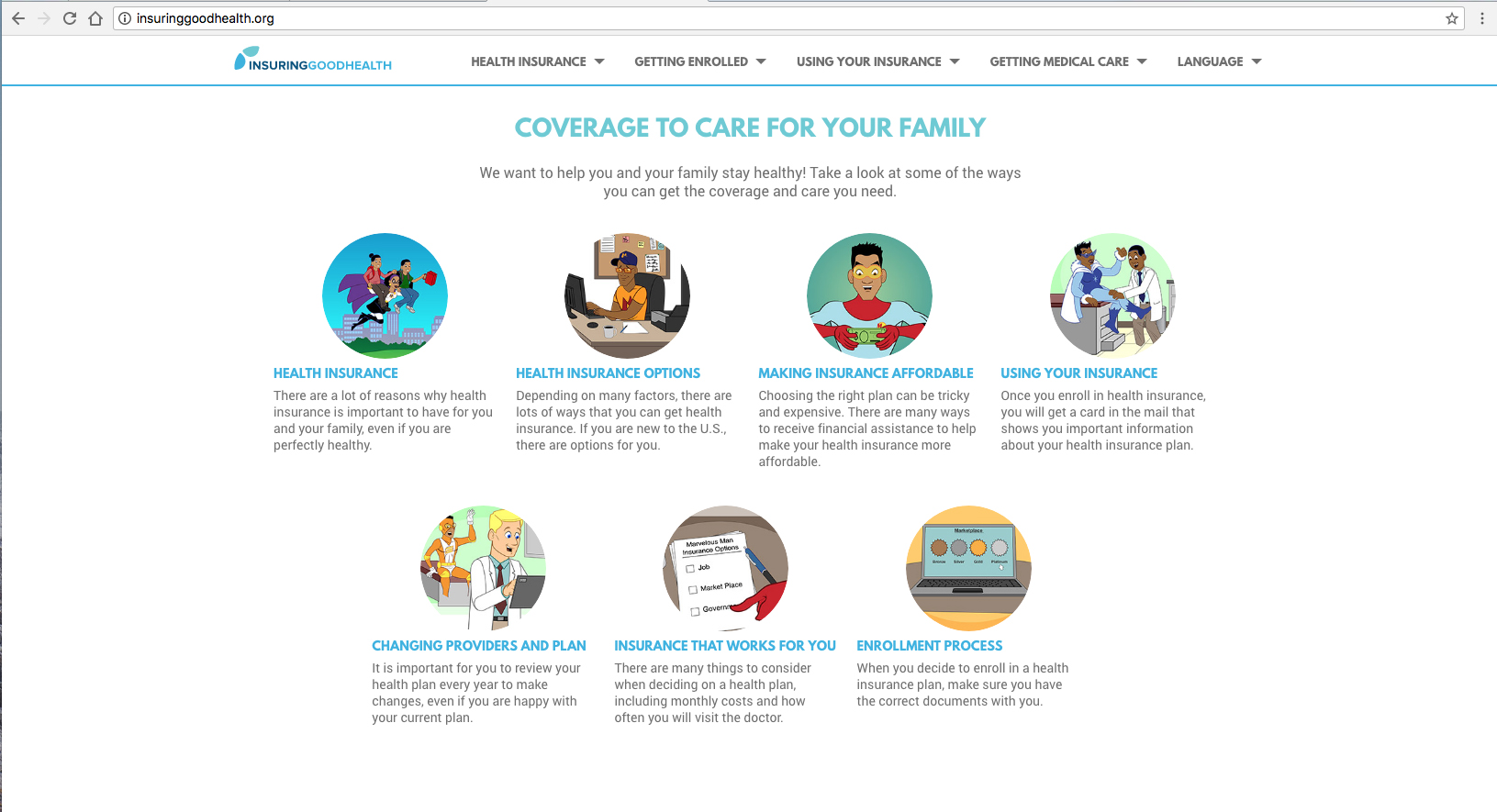