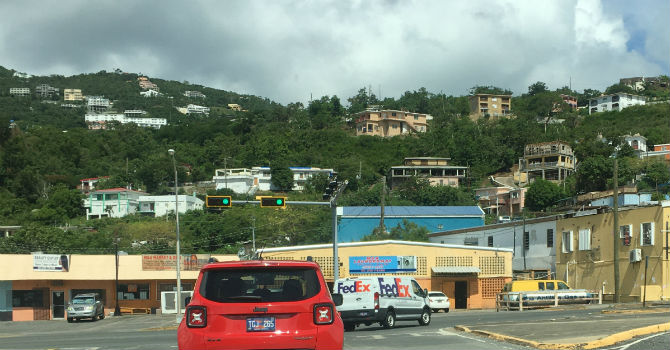 It’s the evening of day four and the team just finished our first day of surveys on the beautiful island of St. Thomas. While enjoying a nice relaxing shower, thinking about the happenings of the day, everything goes completely black. The power went out. I didn’t instantly panic which I am proud of yet surprised about, instead a consistent number of “aww SH&%Ts” and laughs blurted out of my mouth. I hurried out of the shower with the fear of the warm water turning ice cold. My entire room was pitch black and I couldn’t have been happier to have actually adhered to the student guide and brought a flashlight I had laying around my apartment in AA. I soon learned that the side of the resort I was staying on was the only one to lose power. After a few minutes, I just got comfortable in bed with my flashlight and started on this reflection paper. Earlier in the day, my survey group’s local partner explained to us that power outages happened frequently and were normal on the island. Her specific words as she was explaining this characteristic of living in St. Thomas was that “power outages – may not be normal for you all – but are normal for us here”. I held on to that because I started to question the concept of normal and what it means to different people. There are many aspects of the islands that may have seemed unusual to me and other SPH students like driving on the left side of the road, streets without sidewalks, impossible narrow streets and winding steep roads are a characteristic of the St. Thomas island that is very much normal to the locals. But to me and team, as students travelling from the state of Michigan – was something we had to be warned about beforehand. What makes something normal and abnormal? I assume our local partners’ assumption of normality for us is determined by our living in the states. Living in places where hurricanes are a part of the quarterly season is also quite normal for much of the Caribbean, but not the U.S.

I made many connections between the USVI CASPER and that of a field experience I completed five months ago in Mississippi, surveying households and leaving them with bottles for tap water collection. While there, a group of SPH students and I were split into teams with a University of Mississippi student, trained on a specific household sampling method, and assigned a number of homes in a cluster that a site map would guide us through. A major difference between both assessments is that CASPER was federally-funded and its managers were required to do it quickly and do it right. As with anything, I quickly learned about the limitations and shortfalls of a CASPER that I believe is caused by the politics of disaster. Learning about the limitations of a CASPER as we were doing them throughout the week was a critical thing to learn. The conflict between efficiency and effectiveness stuck with me specifically because it’s a common theme across public health practice and urban planning.  Though it is intended to benefit the community, it simultaneously serves the mission of the institution leading it as well. If efficiency is prioritized due to time constraints, limited capacity and funding then it can be quite harmful to the community and even the people doing the fieldwork. This is an important thing to consider as I transition into the workforce as a future planner and public health professional because the success and sustainability of a project truly depends on resources both financial and non-financial.

This experience taught me how much specific resources like local capacity and diversity would have been a significant asset to the effectiveness of the CASPER survey. Diversity of staff leadership may have challenged the survey design or redid questions that asked about mental/behavioral health in a strategic and more culturally sensitive tone. A common response voice by residents I surveyed was the normality of hurricanes and the little impact it has on their emotional and mental well-being in the long-term. Asking about the mental and behavioral health changes among middle to elderly age people of color two years after a category 5 hurricane was especially tough because of the island-wide perception of just the word “mental health” alone.

This brings me into my next major reflection about my experience with the USVI CASPER. People were highly sensitive to the mental health questions and responded to them almost as if it was a personal threat to their character. One woman even condemned the population of people who may even still be suffering the troubling effects of enduring Hurricanes Irma and Maria (with slight agreement from our local partner). They are not unusual cases given that mental health in the Black and minority community is very taboo. Poor mental health is often misunderstood as what some residents claim to mean “loco” or “crazy” and a sign of weakness.

As I write, I am beginning to view the Black perception of mental health from a socioecological perspective. Historically, people of color have been forced to endure extreme hardship by making the most out of very little and learning how to survive in a world where they are not wanted. This applies distinctly to victims of disaster. One woman spoke about the poor nutritional value of the food that FEMA provided her and her diabetic mother immediately after Maria and Irma. She told us about the high sodium content of the spam, pop-tarts and snacks that they provided – specifying that she was given food that Army soldiers even refused to eat and leftovers from other places. She shared her wisdom about how much the post-disaster food supply exacerbated health issues that the Black community was already struggling with, especially diabetes and obesity. I learned through a global urban planning course that neoliberalism and our global economy leaves countries vulnerable and weaker structurally and economically thus exacerbating the impact of extreme events like natural disasters. Yesterday, I learned about the disaster response from Hurricane Marilyn (1995) to now. In 1995, FEMA provided families with gas stoves and better food, very much unlike today when households only received Vienna sausages, pop-tarts and only provided enough funding to help for a short amount of time and what did residents have to do? Survive on their own. Help themselves through out-of-pocket costs.

Many thoughts filled my head when thinking about a reflection topic for my first ever CASPER experience. I must say that my anxiety levels were on high until we landed in our destination at St. Croix. There was a lot of uneasiness in my body that I’ve struggled to explain to myself. Maybe it was or travelling outside the states to do an activity I’ve never done in a country I’ve never been, with other SPH students I didn’t know? That all sounds about right. Life is the real classroom – and this experience was the epitome of that as it taught me a lot about the role of CASPER in the disaster cycle (preparedness, response and recovery), myself, some of the Virgin Island culture and how disasters can impact a place. I recognized my tendency to focus on the task and our survey goal when in the field instead of developing rapport and listening to what the individual was telling me. That is because I was hyperaware of being an outsider who would probably never see that person again. But if there is one thing that I can do as an outsider with possibly little influence in the implementation of this project was to humanize the other person – and myself.

It’s day five and I’m sitting in my quiet hotel room with just the sound of ocean waves crashing outside my sliding balcony door. I am facing the balcony, watching the ocean and a sun peeking through the light grey clouds leaving a dim glow over the beach sands, not as overbearing as its been over the past week. I realized that I haven’t had an evening to sit down and acknowledge the sunset. Feels like Mother Nature is closing out the week for us.