Coronavirus Hits Home: How the Pandemic Impacts Housing and Health 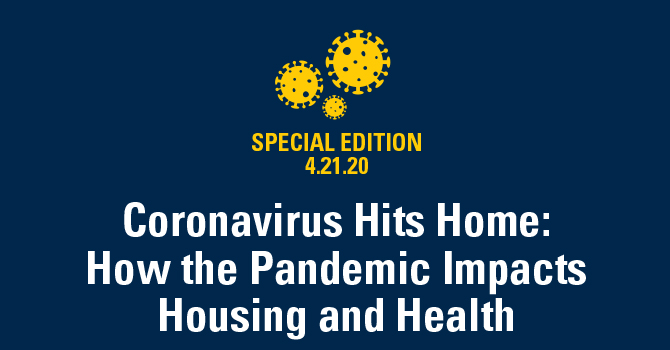 The effects of the coronavirus pandemic have been damaging to the economy, and now many are finding that it’s also intensifying the existing shortcomings of housing and health in the United States as about 22 million people have lost their main sources of income. There’s also an even greater risk of spread of COVID-19 for those who don’t have the ability to “stay at home”. In this episode, Roshanak Mehdipanah, an assistant professor of Health Behavior and Health Educations at the University of Michigan School of Public Health, explains how the devastation caused by the coronavirus pandemic is spreading further than the disease is transmitted and how federal aid for housing support may not be enough to prevent negative outcomes in housing for years to come.

Listen to "Coronavirus Hits Home: How the Pandemic Impacts Housing and Health 4.21.20" on Spreaker.

Mehdipanah: Prior to the pandemic, we already had affordable housing shortages and we had a large percentage of Americans living in housing insecurity. In 2018, about 38 million people were estimated to be spending more than 30% of their income on housing costs - everything from rent to mortgage to property taxes, utilities and such. And so if this was happening prior to the pandemic, post-pandemic when we know that low income households will be hit worse in terms of economic impacts, then we can only imagine the shift from housing insecurity to becoming more housing unstable, and unfortunately in some extreme cases, losing your home altogether.

Speaker 1: Hello and welcome to Population Healthy, a podcast from the University of Michigan School of Public Health. This episode is part of a series of special editions of our podcast focusing on the ongoing coronavirus pandemic.

We're already seeing social and economic consequences that will have long-term impact over the years to come if we aren't able to address them now. Roshanak Mehdipanah is an assistant professor of Health Behavior and Health Education at the University of Michigan School of Public Health. She spoke with us about how housing issues are playing a huge role in the current spread and the lasting effects of the COVID-19 outbreak.

Mehdipanah: Throughout the last couple of weeks we've seen many states doing things around halting evictions and foreclosures. We saw Gretchen Whitmer put out a moratorium on evictions. On the Wayne County level, we saw a moratorium on tax for closures. So there's a lot being done in terms of preventing people from losing their homes during this process, and also some forms of help have come through reinstating suspended utility shut-offs or providing some form of mortgage relief.

However, it's important to know that these are short-term effects and so we're a bit worried in terms of when the duration of these aids from one month to 12 months to the duration of the crisis once they're over people are still gonna be expected to pay for that rent or people are still expected to continue paying off that debt. And so, coupled together with the fact that we're dealing with huge unemployment rates and people losing their sources of income that could lead to serious consequences of housing loss or again housing instability.

If pre-pandemic we had a situation where a family living on the full-time minimum wage income wasn't able to afford any fair market rent for a two bedroom apartment anywhere in the US, post-pandemic we can only imagine what that will mean.

We have seen that the greatest loss of jobs is occurring in the low-income brackets and we also know that individuals or households that tend to be cost-burdened, a large share of them are the low-income population. So we really have to be careful in terms of what is going to happen and do our due diligence to address these issues as we’re all in it together.

Another aspect of it that I think is really important is a lot of these federal aids are coming down helping homeowners that currently have mortgages backed by the Federal Housing Administration and we have to remember that's not a case for everybody, right? There are individuals that are on land contracts or individuals that have paid off their homes but are now going to struggle with paying their property taxes. Then we also have a large population of renters and some of the aids that have been discussed have left the renters out of the picture or have been really less focused on renters. And so there really needs to be more highlight of this population that is structurally vulnerable, but also addressing things that could help relieve renter burden as again some of these moratorium are lifted because evictions are gonna keep going forward and so if people aren't able to pay when these issues are going to rise.

Although some landlords have come out and said you know, we're okay with our tenants not paying, that's not the case for everyone. And we have to remember that some landlords also depend on this as a source of income. We need to address it from multiple angles.

Speaker 1: Financial stability and your ability to afford other basic needs is one way that housing affects your well-being. Housing insecurity also affects a wide spectrum of an individual's health and their community's health.

Mehdipanah: Housing insecurity has been linked to physical and mental well-being, everything from being more food insecure or adhering less to medications, to potentially having impacts on depression, anxiety, and also the stress associated with the thoughts of being evicted from your home, to then essentially being evicted and dealing with the stress of looking for re-housing.

Precarious housing conditions definitely can play a role in continuing the spread or transmission of the coronavirus. We know that post 2008 recession, there was an increase or surge in overcrowding. So people that lost our homes were now doubling up with family, friends or even strangers in order to avoid going into a roofless-state or going into shelters. If we see similar things happening right now, then we can expect to have these overcrowded homes that then if one person got sick, based on what we're seeing in transmission, other people in the home are really at higher risk of getting the virus.

A lot of people don't realize that social distancing or staying at home doesn't always mean that everybody can stay at home or that staying at home is safer for them compared to other situations. If, for example, a family or a household was dependent on being out of the home to get heat or cooling at their local mall, library, or other places and now they're being told to stay and they don't have a running furnace or air conditioning depending on where they are, we know that extreme temperatures have an impact on various health outcomes.

The other aspect of it is that some of these homes may not be livable or inhabitable. They're just really serve the purpose of the individual having a roof over their heads while they're sleeping, but in some conditions we're talking about homes that still don't have their water or don't have electricity. We talk about stockpiling food but for some of these homes when you don't have electricity, you don't have a fridge. And so, keeping food fresh and all those other aspects of this idea of social distancing and social isolation at home may not really be a reality. Interventions like stay-at-home could disproportionately affect certain populations. That's something we need to take into account.

Speaker 1: It might be difficult to think about the long-term when there is so much focus on the here and now, but there are big benefits to taking the time now to plan for the years to come.

Mehdipanah: We're now at a position where we need to have these conversations about longer term strategies. There have been ideas that are being thrown around in terms of using past policies to prevent homelessness or things like more cash assistance and such, but I think it's still very premature. We need to have those conversations in terms of what is this gonna look like in the next year to five years to 10 years? How it's gonna affect housing as a whole, but also society as a whole, right?

If we have large populations that are living in this month-to-month uncertainty, instability and such, then we have to understand that this is gonna have great impacts on the population health and other aspects of day-to-day living. Those are the conversations that really need to be had at this point. We've seen now as responses to homeless populations getting housed, but it almost seems like it had to have a crisis before that happened in the first place. Those are things that are really on everybody's mind in this area of let's try to keep as many people as safe as possible.

One of the things that I think has been really helpful is the mobilization of all these existing community groups and national-based organizations around housing and housing insecurity. And I think they're doing great jobs and putting out resources and information on some of those next steps in terms of what can be done. I think there's definitely people having those nationwide conversations but also local conversation in terms of when the crisis is over, what should happen. It’s important to have those in place so when there is a call for what can be done, these groups have already done a large part of that leg work to mobilize and get these ideas out. And since they were so closely with communities that are affected by it, they are really in the best position to make some of those recommendations.