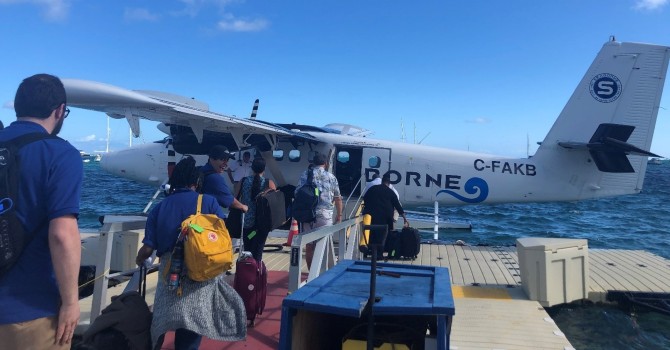 Note: There was a temporary pause in the publishing of our blog posts as our team returned in early March to the rapidly changing nature of the Coronavirus in Michigan. We now wish to share the thoughts of students on their experiences just before the COVID-19 outbreak.

My most vivid first impression upon landing in the U.S. Virgin Islands (USVI) was the heat. It had been about 16 °F when I left my apartment in Ann Arbor at 3:00 am, and I stepped off the plane into 85 °F weather and beautiful sunshine in St. Croix. Driving was an adventure even as a passenger; not as scary as I thought, but definitely strange to be on the left side of the road. I enjoyed driving past the brightly colored buildings, though some evidence of hurricane damage and economic struggles remained even almost 2 and a half years later. The variation in socioeconomic status within neighborhoods surprised me, and in some cases seemed like much less variation than is seen within individual neighborhoods in the continental United States. Conducting the interviews over the next several days provided a deeper lens into how individuals experienced the hurricane and the recovery.  It was easy to see how historical-structural factors played a role in people’s hurricane recovery and continue to play a role in people’s health in the USVI.

I went into this experience with the primary goal of gaining experience in public health data collection while assisting a local health department in an equitable partnership. I came away with a huge amount of respect for the people working at the USVI Department of Health (DOH) and for the time and energy invested in obtaining every single datapoint from a survey. I never thought that I would want to conduct data collection as a part of my career, preferring to stay on the analysis side, but now I don’t think I would mind. It was at times exhausting and demoralizing, but with small rewarding moments and results that more than made up for the frustrations. Standard statistical methods that sounded easy enough on paper created lots of logistical hurdles when on the ground gathering data, but we still managed to collect a lot of important information. Interacting with members of the community varied from straightforward answering of questions to hour long conversations when people elaborated on their responses. My favorite interaction was an older woman we had interviewed playing us her favorite music so we could dance together as our team left her home.

Another interesting aspect of the surveys was how they affect the DOH’s engagement with the USVI communities beyond the gathering of information. It presents an opportunity for members and representatives of the DOH to interface with the community, put individual faces to an institutional entity, and show that the department cares. That being said, there were times that I wished that I worked for the USVI DOH long term so that I could share more information about some of the ongoing initiatives and programs in place. I often felt like a tourist while I was there, doing my best to connect with people and display cultural humility despite not being a member of the community. I think it is worthwhile for anyone wanting to conduct household surveys to deeply consider how it benefits the participants, both on an individual and community level. Ultimately, I am proud of the work that we did and hope that the USVI local health department can continue to make a sustainable impact on the health of the USVI population.