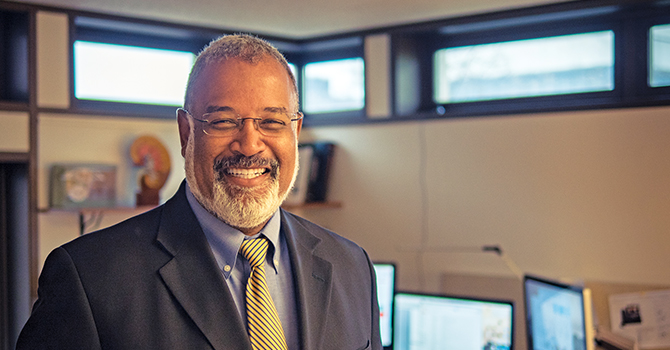 After serving as the dean of the School of Public Health since January 2011, Martin A. Philbert was named provost and executive vice president for academic affairs at the University of Michigan in June. He was approved by the Board of Regents at their June 15 meeting and officially began his appointment on September 1. In recommending the appointment, President Mark Schlissel said, "Dr. Philbert's success in leading our world-class School of Public Health for the last six years and his track record of high-impact scientific research, academic leadership and public service makes him an outstanding choice to be our next provost."

Philbert follows former provost Martha Pollack, who left her position in January to become president of Cornell University, and Paul N. Courant, professor of public policy, economics and information who served as interim provost since February. The provost is both the chief academic officer and chief budgetary officer of the Ann Arbor campus and is responsible for sustaining and enhancing the university's academic excellence in teaching, research, and creative endeavors.

The new provost will work closely with President Schlissel in setting institutional priorities and the budget to carry them out. The deans of all 19 schools and colleges report to the provost, along with the dean of libraries and a host of vice provosts, vice presidents, directors, and chief officers. Numerous offices and entities—including the Matthaei Botanical Gardens and Nichols Arboretum, the University Mentorship Program, Undergraduate Admissions, Financial Aid, the Registrar, the Center for the Education of Women, and the Officer Education Programs come under his oversight.

While Philbert is nationally recognized for his expertise in neurotoxicology and experimental neuropathology, few people outside the Michigan Public Health community know that he is also a serious musician. Philbert studied organ performance at the Royal Academy of Music in London before switching paths to a career in public health.

Joining Michigan Public Health in 1995 as assistant professor of toxicology in the Department of Environmental Health Sciences, Philbert demonstrated his leadership skills early on. He was promoted to associate professor of toxicology in 2000 and that year began serving as associate chair for research and development in the Environmental Health Sciences department. In 2004 he earned full professor status and that year also began serving as interim director of the School's Center for Risk Science and Communication, a position he held until 2010.

During these years, Philbert's reputation grew not only as a top researcher but also as a great colleague, teacher, and mentor. His understanding of music as a profession helped. Shama Cash-Goldwasser, a graduate of Michigan Public Health who is now an Infectious Diseases Fellow at the Stanford School of Medicine, took much the same path to public health as did Philbert—from a budding career in music. "Martin was a wonderfully supportive mentor to me," Cash-Goldwasser says. "I had a lot of fear in changing careers, and my path to medicine wasn't easy. Martin was encouraging of my transition, and that made a tremendous difference. Perhaps he understood my experience because he'd had a similar one."

In 2004 Philbert was appointed as senior associate dean for research and facilities, and this role in particular gave him opportunities to assist colleagues in the School in creating and nurturing campus-wide partnerships. Gonçalo Abecasis, Felix E. Moore Collegiate Professor of Biostatistics and chair of the Biostatistics department, was especially grateful for Philbert's guidance on one of Michigan Public Health's signature recent developments. "Dean Philbert contributed a great deal of wisdom as we worked to establish the Michigan Genomics Initiative," says Abecasis. "I learned from him how to diffuse potential conflict and to approach situations in good faith and with sincere transparency."

The latter part of Philbert's title as an associate dean for research and facilities meant he would get to know the School in ways that few do. The complex would grow to nearly half a million square feet in 2006 with the completion of the Crossroads, a project that kept Philbert and many others extremely busy.

The whole project intrigued him, especially the chance to get to know the hidden corners of the facility. In his words, these mundane systems epitomize public health. "The really important things in the School—much like public health—are out of view. We take for granted that the air coming in is filtered and at the appropriate temperature. That lab hoods will function properly and safety systems will work. Those are my favorite places, because those have to work. Without them, the building is useless. Public health is frequently as unnoticeable and equally indispensable."

Colleague Alfred Franzblau, professor of environmental health sciences, says Philbert's deep engagement with the Crossroads project demonstrates his incredible commitment to the institution at all levels. "The construction of a new building was a very critical time for us, and Martin was very involved with this huge task, and it turned out well. It certainly wasn't fun or glamorous—it just needed to get done and done properly, and that project's success had a huge impact on all of us."

From the beginning of his tenure as dean, it was clear Philbert had a different way of looking at things. During his first year as dean, he asked everyone at Michigan Public Health to participate in a school-wide visioning process. His stated hope was to address dramatic shifts in the landscape of society and especially academia.

Sharon Kardia, Millicent W. Higgins Collegiate Professor of Epidemiology and senior associate dean for administration, says the visioning process was so successful because of how inclusive it was and how it focused on innovation: "Martin invited everyone to the table, to share their dreams of what we could be in the future."

"And when he asked us to think about innovation," Kardia remembers, "he wanted us to think critically about everything we do, including the details of our administrative work." This included an emphasis on using data to inform and improve administrative decision-making. "Scientists are comfortable using data in our scientific work, but it is actually a big thing in academia to prioritize data in administrative settings. And Martin led us through some of those difficult conversations."

The visioning process also advanced discussions around the future of the School's curriculum. Ideas that had been considered for years—with several possible paths—came to fruition under Philbert's leadership. The creation of the Department of Nutritional Sciences was one of those ideas. "Nutrition had been in our environmental health sciences department for decades and with great success," says Kardia. "We needed to seize the moment and take the next logical step."

Another was the undergraduate program, which was "probably the most conspicuous milestone for the School in recent years," says Franzblau. "The idea and the process go back many years, but Martin fostered and endorsed them in critical ways as dean."

For Abecasis, Philbert paid close attention to student voices and placed importance on increasing enrollment. "Martin would ask us how we intend to remain a compelling choice for students given alternative institutions. And he would challenge the faculty to think about delivering exciting content for students, like flipped courses, online components, and more opportunities for global research and study," Abecasis says.

And by "accessibility," Boulton means that Philbert was always willing to travel on behalf of the School. "Martin is a gracious ambassador for public health. He connected easily with hosts in many countries," says Boulton. Michigan Public Health is now recognized among peer institutions as a major player in global public health and, most importantly, has made significant contributions to improving public health around the world.

The innovation and visioning processes also led Michigan Public Health to add a unique curriculum component that quickly became a model for other schools and colleges. The Innovation and Social Entrepreneurship program fosters formal venues—such as the Innovation in Action competition and the Innovation Studio space—for students and faculty to hone the technical skills of collaborative science and to create prototypes for processes and products that can improve public health. "And this is something we need to attribute directly to Martin," says Kardia. "This formulation of innovation and social entrepreneurship wasn't on our radar until Martin started talking about it. He knew students and faculty would benefit tremendously from this new dimension to our work and that it would in turn benefit public health everywhere."

Provost of a Barge

For those who know him well, Philbert's ability to succeed as provost of the university will be a natural extension of strengths he carries with him from a long career of rigorous learning, teaching, and connecting with people.

Adaptability and grace are among those strengths. "New leadership is almost always confronted with enormous issues," says Franz-blau. "This goes with the terrain, but you can never assume conflict will go easily, and you need a good deal of grace to handle those elements of risk. And Martin is exceedingly gracious." One source of that grace, says Abecasis, is Philbert's humility. "Martin is always open to new techniques and new ways of doing things, including a real openness to self-evaluation and self-critique."

Good leaders usually have an edge, too, and Philbert's seems to be the precision and patience of his approach to bold ideas. "Martin pushes, but in good ways," says Kardia. "He was a good steward of the future of the School, and he's pointed us in good directions. Big institutions are like barges—they can move only a degree or two at a time, and if your goal is ambitious, you'll also need patience. You need someone who can push in the right direction and then maintain a steady hand while you travel the way."

Cathleen Connell has been named interim dean of the School, where she has a long history of leadership. She joined the faculty in 1989 as assistant professor of health behavior and health education. Connell has served as associate and senior associate dean of academic affairs and as associate chair and chair of the Department of Health Behavior and Health Education, as well as serving as associate director and interim director of the Center for Managing Chronic Disease.

"I look forward to carrying on the work of the School in this great trajectory as the search for a new dean continues," says Connell. Philbert in his toxicology lab ca. 2000. Classically trained musician Philbert relaxes at his home piano in 2003. Philbert in a mechanical space in the new Crossroads building. Philbert bobbleheads, a sought-after souvenir around the School of Public Health. At his farewell reception, Philbert receives an unofficial instruction book for his new job