Pursuing Excellence on the Track and in the Classroom 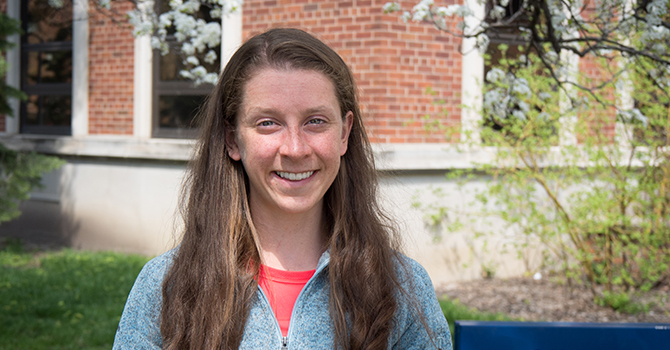 
Erin Finn has built a storied athletic career at the University of Michigan: she is a nine-time All-American, nine-time Big Ten champion, five-time Big Ten Athlete of the Year, a three-time Big Ten Distinguished Scholar, and a four-time national runner up. Just this month, Finn received a prestigious Big Ten Postgraduate Scholarship to continue her studies, and was awarded the Big Ten Medal of Honor. Now pursuing a Master's Degree in Epidemiology here at Michigan Public Health, Erin shares her passion for science, her family inspiration, and her aim to bring public health training to medical practice.

I want to take care of people before they're sick—see patients holistically, as a whole person, and not just as a disease. People are so much more than just something that needs to be treated.

I grew up wanting to be like mom. She's a physician. When I was growing up, she was always supportive of whatever I pursued, and she always built me up and believed in me, whether that was in sports or school. When you have someone who unconditionally believes in you, you can strive for whatever you want. And it makes you want to be like that for someone else too. I've gotten the blessing of being able to pursue whatever I want with support and full belief that I'll be successful. If I can make other people, and other women, feel as strong as she's made me feel, then I'll have made the world a better place.

I've always wanted to be a doctor. I would love to go to med school, but I want to be a doctor who treats more upstream than downstream. I want to take care of people before they're sick—see patients holistically, as a whole person, and not just as a disease. People are so much more than just something that needs to be treated. My public health education, particularly in epidemiology, has helped me to recognize that there are problems that pure medicine doesn't really tackle, and I know that if I want to be an effective doctor, I need the knowledge public health training can provide. There's just so little of it in medicine right now. We've got light-years to expand.

I'm definitely a science nerd. I love to know how things work. I think things become more understandable when I know the complexities of how they come together, and understand the interactions that go into why something happens. Human physiology, for example, fascinates me, particularly on a biochemical level. I love learning about gas exchange in the lungs, and oxygen balance in the cell, how different drugs cross the blood brain barrier. I just want to absorb anything and everything that applies to what I'm interested in, whether that's sports and exercise, or drug treatment, or disease. In that way, science is something that helps me temper myself as an athlete, too, helping me understand when to rest to avoid injury and reap the benefits of my training.

The pursuit of excellence inspires me, but I am trying to give myself a break from the perfectionism part of that. I think we should always be pursuing the best version of ourselves. But I think it can be hard to detach yourself from the perfection part of that, and it can hold you back. It really makes me proud to know that I've given 100 percent, and that I'm using what I've been given to the best of my ability. There's a kind of satisfaction in that—knowing you gave the best no matter what it is. It's a really pleasant way to lay your head down at night.

At Michigan Public Health, I just feel a passion and a heartbeat. It is a thriving atmosphere where people really want to work together to change the world. People aren't just coming here to learn a skill to get a job and make a lot of money, they genuinely care about people—they're doing it because they want to help people. You feel it the moment you walk in, and it makes me more excited to pursue a better world. It's very unique to Michigan Public Health.

It's incredible to be in an environment where I'm side-by-side with people who've been out in the world and experienced so much. As an undergrad, my friends and I sometimes lost sight of what really happens outside of college, outside of the academic sphere. Now I've got classmates who graduated from top universities, others who spent years in the Peace Corps before coming to Michigan. It really opens your eyes to the different ways you can challenge yourself in the future. It makes you feel a little smaller, but it gives you perspective—you can have an impact. You start to see that there are so just many ways that you can use your talents to positively affect people.