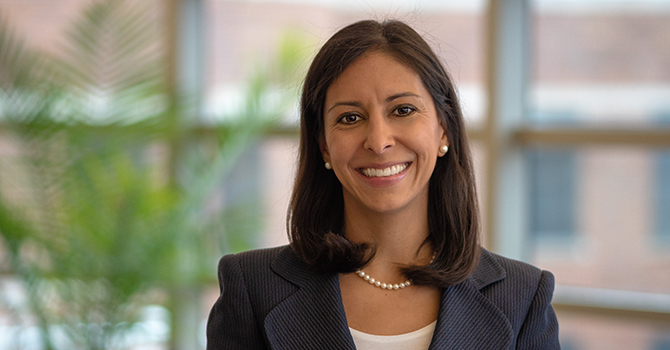 
With a legal background and a PhD in health policy, Rebecca Haffajee explores the relationship between the law and health, focusing on policy issues related to behavioral health, such as the opioid epidemic and marijuana legalization. As an assistant professor of Health Management and Policy at the University of Michigan School of Public Health, she collaborates with faculty across the university on cutting-edge research and teaches the next generation of public health leaders about health law and policy.

We sat down with Haffajee to discuss her path to public health, her research interests, and her teaching philosophy.

When did you first become interested in public health?

As the daughter of two health care professionals—my father is a cardiologist and my mother was a dentist who did a lot of research around periodontal disease—I had a lot of exposure to the health field early on.

I went into college thinking I wanted to go to medical school or dental school, but during my undergraduate studies at Duke University, I developed an interest in public policy and women's studies. I was keenly interested in health issues, but I wanted to approach them from a policy perspective. I also wanted to focus on marginalized populations and populations that really resonated with me, such as women.

I was particularly inspired by one of my professors at Duke, Dr. Kate Whetten. It was in her courses that I first explored questions like: How do we measure population health? How do we think about it from an equity perspective? How does understanding the epidemiology and evolution of a disease inform approaches to mitigating its harms? And what can we do from a policy perspective to really impact population-level outcomes? Classes and applied experiences in my undergraduate years really ignited my passion for population health policy.

With the law, it’s often the case that whoever argues better or is more persuasive wins. On the other hand, in health research and policy, decisions are often grounded in data and numbers. There’s a concreteness there that I have always been drawn to.

Did that experience change your post-college plans?

In some ways, yes. Because I wanted to work in the policy space, I applied to law school rather than medical or dental school. I was accepted to Harvard Law School but deferred my admission to do a yearlong post-graduate fellowship under Dr. Whetten's mentorship.

I conducted HIV/AIDS research in Tanzania for 10 months, working with a nonprofit to study childhood development among children who were affected by AIDS. I was overseeing a pilot study to test the cultural appropriateness of psychological tools used to measure childhood development in institutional-based versus home-based care environments.

The experience provided me with great exposure to international health, to different cultures, and to conducting field research. This was when I realized that I really loved research.

Then, during my first year in law school, Harvard launched a new JD/MPH dual degree. I was the first and only student in the program in its inaugural year.

I loved the curriculum because it satisfied my craving for health-related content, which I otherwise would not have had the opportunity to explore beyond maybe one health law class. I really wanted to marry health with the law, and this dual degree allowed me to do that. The timing was really fortuitous.

You practiced law for a few years before going back to Harvard to get your PhD in health policy. What made you decide to dig deeper into public health?

There was something about the law alone that was never fully satisfying to me. I always loved math and quantitative analyses. But with the law, it's often the case that whoever argues better or is more persuasive wins. On the other hand, in health research and policy, decisions are often grounded in data and numbers. There's a concreteness there that I have always been drawn to.

Many health law researchers at that time worked in medical malpractice. I could have easily gone in that direction, but I found increasingly—both in my doctoral training and in other life experiences—that I was drawn toward behavioral health.

I decided I wanted to go back to school and train further in research methods for policy evaluation. I was hugely inspired by one of my mentors, Dr. Michelle Mello, who ran the dual degree program at Harvard. I found the type of health law research that she conducted inspiring and thought, that's what I want to do. So, I pursued my PhD at Harvard, in large part to train under her mentorship there.

While pursuing your PhD, what area of health policy did you focus on?

Many health law researchers at that time worked in medical malpractice. I could have easily gone in that direction, but I found increasingly—both in my doctoral training and in other life experiences—that I was drawn toward behavioral health. There were not many law evaluators working in that space at the time. Part of what drew me to that area was the increasing public attention to the heavy population-level burden of mental health and substance use disorders.

In addition, policy was changing quickly. I saw an opportunity where there was a lot of variation in policies across states and the federal government when it came to behavioral health. That gave me, as an evaluator, a chance to research these laws and understand what effects they were having—for example, if they were having intended or unintended effects, if they were improving health outcomes, if they were reducing costs—all these really important outcomes.

Today, one of your main areas of focus is on policy issues related to the opioid epidemic. How did you first become interested in this issue?

Researchers recognized that both opioid prescribing rates and overdoses dramatically increased in the first decade of the 2000s. I developed an interest in prescription drug monitoring programs around 2011. These were already very prevalent programs among states, but I noticed there were many differences in the policies states were adopting. Honestly, at the time, I thought prescription drug monitoring programs might just go away because prescribers were not using them very frequently.

In fact, the programs have gone in the opposite direction and now they are touted as a major solution to the opioid epidemic. People think, if only we had prescribers checking these prescription drug monitoring databases and noticing when a patient is a high-risk candidate for opioids based on their profile, then practitioners could just not prescribe the medication and that would solve all our problems.

Obviously, it's not that simple. But I do still believe that prescription drug monitoring programs are a tremendous clinical tool and have a role in mitigating some of the effects of the opioid epidemic when used prudently.

What other areas of the opioid epidemic are you researching?

My collaborators and I are looking at some of the potential unintended consequences of reducing prescription opioid supply to patients who are addicted to or dependant on the medications. Say, for example, a doctor has done a prescription drug monitoring database check and realized the patient already has a high number of prescriptions and then cuts them off entirely. That may not be the best clinical decision, as some patients might become desperate and turn to other sources, including illicit heroin, which is now often spiked with fentanyl and can be much more dangerous than the prescribed medication.

We're trying to figure out how much of that substitution is happening among which types of patients and how can we better use this rich source of prescription monitoring data to provide the best care and optimize health outcomes. We're looking at things like making sure when clinicians see those flags that they are having conversations with patients or referring them for treatment, rather than just denying drugs. We're thinking about how to appropriately taper and make evidence-based treatments available for opioid addiction. We need to prioritize and coordinate support and robust care, as opposed to just shutting the door on the patient, if we want to achieve the best health—and life—outcomes.

As a faculty member at Michigan Public Health, you teach students about public health law and policy. What do you hope your students take away from your classes?

When I was working on my PhD, my advisors didn't work in the content area of my research directly (although they possessed expertise in various aspects of the research). So I had to become a subject matter expert quite quickly and develop my projects somewhat independently. Ultimately, this experience served me very well, because when I started as a faculty member, I was more confident and self-sufficient as a researcher and professional.

So I try to impart the same skill—that of achieving independence—in my students. My overall teaching philosophy is to challenge my students to develop innovative and effective strategies to improve public health. The students at Michigan Public Health are very smart and capable, and I tend to expect a lot from them. I look back to my professors and believe I learned the most from those who were the most challenging. That's when you grow the most as a student and as a thinker.

The students at Michigan Public Health are very smart and capable, and I tend to expect a lot from them. I look back to my professors and believe I learned the most from those who were the most challenging. That’s when you grow the most as a student and as a thinker.

Looking back, how have behavioral health policy and society's attitude toward these issues changed in the last 10 years?

Now—while there is still stigma and undertreatment when it comes to behavioral health issues—as a society we respect the seriousness of these conditions, their toll on populations, and the need for treatment and robust coverage. There's been a significant shift in cultural beliefs, and a lot of that has been driven by or is in conjunction with legal changes. 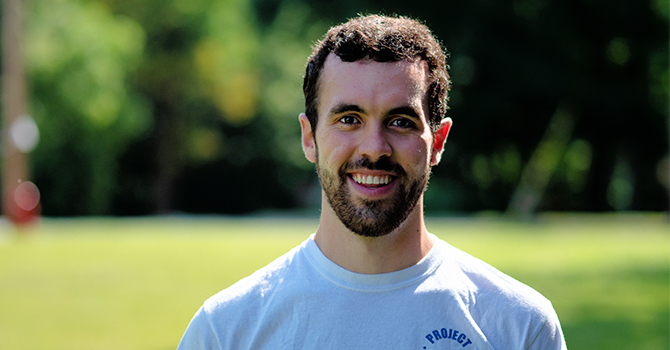 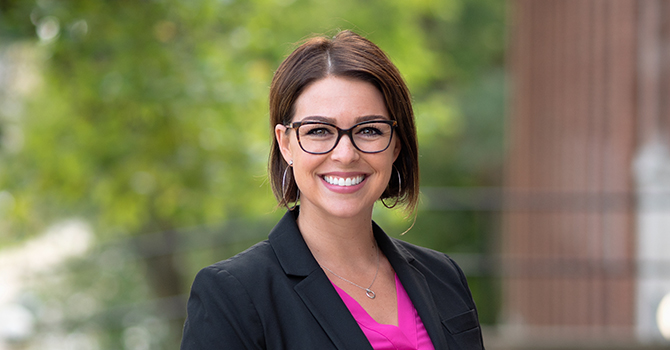 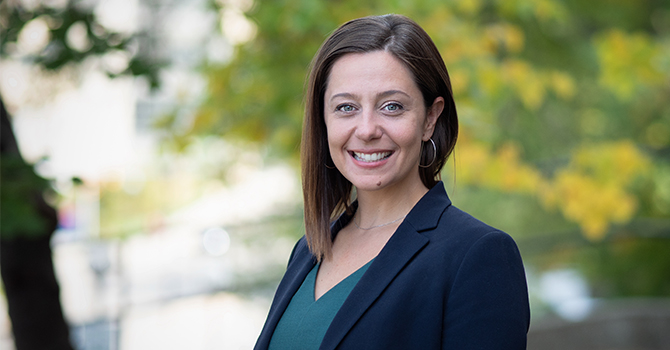 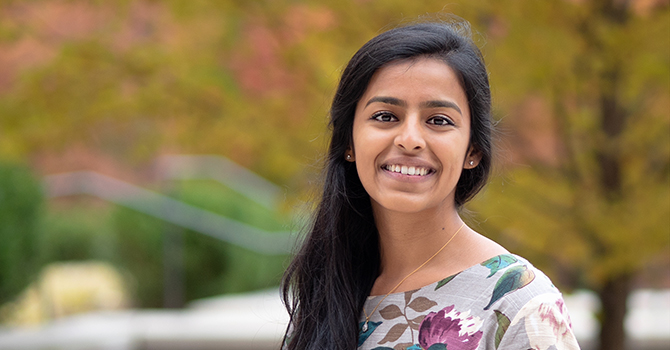 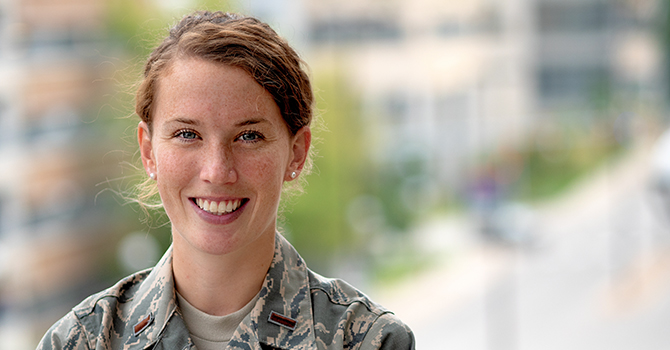 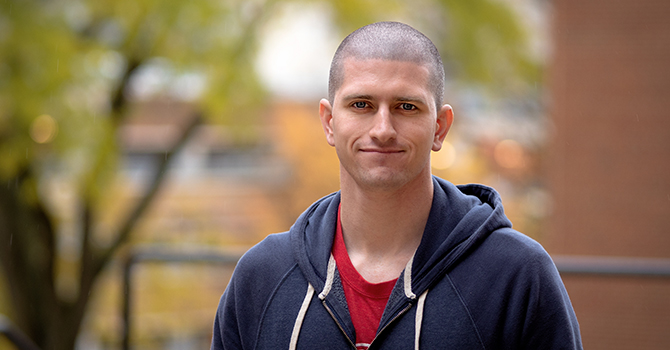