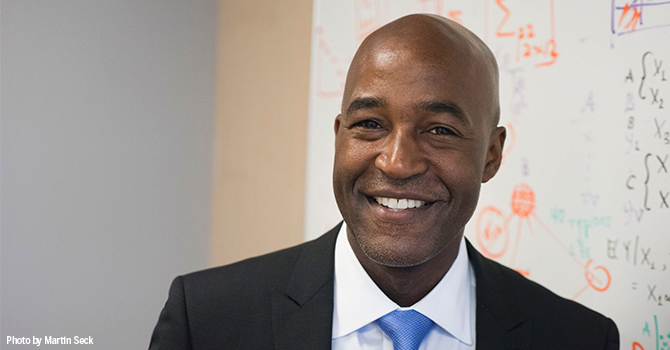 
As a biostatistician who focuses on neuroimaging, F. DuBois Bowman has spent his career analyzing complex brain imaging data in search of patterns that can help psychiatrists and other researchers better understand the brain and identify and treat neurological conditions.

As he reflects on his education and career, he can likewise see patterns that, while not always apparent at the time, led him to where he is today.

"One of those patterns—a recurring theme in my public health journey—is Michigan," Bowman says. "I was born and raised here, I got my master's degree here, and now I'm coming back to lead the School of Public Health. There's an alignment of sorts in me returning to the school that played a central role in my development, to the city where I grew up, and to a state that is the core of my identity."

Bowman started his academic career at Emory University's Rollins School of Public Health, where he was among only a handful of statisticians in the world looking at neuroimaging data. He started the Center for Biomedical Imaging Statistics, the first center of its kind. After 13 years of teaching and doing groundbreaking research at Emory, he was ready for a new challenge—leadership. In 2014, he accepted a position as the chair of Biostatistics at the Columbia University Mailman School of Public Health.

“I’m thinking about how the school—with its talented faculty, staff, and students and its many resources—can have an impact on the Michigan communities that are near and dear to me as well as communities across the globe.”

Now, entering the next phase in his public health journey, he is returning to the University of Michigan School of Public Health to become the school's next dean.

"Coming back in a leadership position has shifted my perspective," he says. "I'm thinking about how the school—with its talented faculty, staff, and students and its many resources—can have an impact on the Michigan communities that are near and dear to me as well as communities across the globe."

Planting the Seed for a Career in Public Health

As an undergraduate student at Morehouse College in Atlanta, Bowman majored in mathematics and took pre-med requirements. But a pivotal conversation with a biostatistician, Bill Jenkins, whom he met through a diversity-in-research pipeline program opened his eyes to a career path he hadn't previously considered.

"I remember leaving that conversation very excited, because biostatistics seemed like a perfect field for bringing together my dual interests in quantitative approaches and mathematics, paired with the opportunity to improve health and make a positive impact," Bowman says.

Around the same time, Morehouse launched a public health sciences program, giving Bowman the opportunity to take classes and learn more about the field.

"At the time, I really didn't know that all of this would lead me to a career in public health. I was still completing pre-med requirements and considering graduate school in pure mathematics," he says. "But looking back now, I know these experiences planted the seed for what was to come."

"I Realized I Belonged at Michigan"

Upon graduating from Morehouse, Bowman was accepted to the master's program in biostatistics at Michigan Public Health but instead chose to enroll in a mathematical statistics program at Duke University.

Bowman had been in touch with Michael Boehnke, the Richard G. Cornell Distinguished University Professor of Biostatistics, when he was first considering Michigan Public Health and says Boehnke was a key player in helping him make the decision to come to Michigan the following year.

“I always have something at the bottom of my drawer that is boldly maize and blue. And now I won’t have to harbor any guilt for pulling out my Michigan gear and proudly cheering on my Wolverines.”

During his time as a biostatistics student at Michigan, Bowman did coursework in Epidemiology and was a research assistant for faculty in the departments of Health Management and Policy and Health Behavior and Health Education, with links to a major study at the Institute for Social Research. He completed coursework in the Inter-University Consortium for Political and Social Research (ICPSR) summer program, which supports the social science research community. He even worked with the Michigan Athletics Department, tutoring athletes in mathematics and statistics.

"This is something I have come to truly appreciate only in hindsight—as a student at Michigan, I was able to gain a wide perspective by pursuing opportunities to apply my skills from biostatistics to many outside areas," Bowman says. "It established a solid foundation for me."

After graduating with his master's degree from Michigan Public Health, Bowman went on to complete his PhD in biostatistics at the University of North Carolina Gillings School of Global Public Health.

On the Forefront of Innovation in Neuroimaging Statistics

"When I was a young faculty member at Emory, neuroimaging was just emerging as a field, and the psychiatry faculty realized that in order to move forward they needed really sound statistical input," he says. "But the types of problems they were facing were not standard statistical problems—they were things that needed innovations, new solutions, new tools to be developed and built."

At the time there were only a handful of statisticians working in this area, and Bowman was able to work on the forefront of those innovations.

"It was a really important moment in time, during which I had the opportunity to work and develop expertise in a very specialized area," he says. "While it was daunting then, I was up for the challenge. And it's been incredibly rewarding and stimulating to see the field grow and mature. Today, every major research university has a program focusing on neuroimaging."

From Top-Level Support to Grassroots Efforts for Diversity

Another pattern that has emerged in Bowman's public health journey is his passion for diversity, equity, and inclusion. He is committed to creating a more diverse workforce within biostatistics and within public health more broadly.

"A lot of people come to this field the way I did—because someone told them about public health as a career option at a pivotal point in their lives," he says. "I think it's critical that we're having these conversations. And then we need to take it to the next level, where it's not just telling someone about the field but actually strengthening their foundation by bringing them in as part of a summer program or engaging them in other opportunities."

“I am thrilled that Michigan has a deep commitment to diversity, equity, and inclusion from the highest levels of the university.”

Throughout his career, Bowman has mentored minority undergraduate and graduate students, postdoctoral fellows, and faculty. He has also led pipeline training programs and served on advisory boards of NIH programs that target underrepresented students.

"I am thrilled that Michigan has a deep commitment to diversity, equity, and inclusion from the highest levels of the university," he says. "I think diversity needs to span the entire gamut, from top-level support to grassroots efforts. We need a strong, diverse pipeline, and I am eager to be part of the school's efforts to strengthen and bolster the university's commitment to diversity, equity, and inclusion."

For Bowman, who has been a Michigan fan since childhood, returning to Ann Arbor also brings to light another pattern in his life—the Block M.

"Being at other schools has been challenging at times. I've learned to go to the games and root for the home team, but I've had a strong, longstanding commitment to the University of Michigan," he says. "I always have something at the bottom of my drawer that is boldly maize and blue. And now I won't have to harbor any guilt for pulling out my Michigan gear and proudly cheering on my Wolverines."

Sometimes the patterns of the mind and rhythm of the heart align harmoniously. For Bowman, that's always been Michigan, where his journey continues. 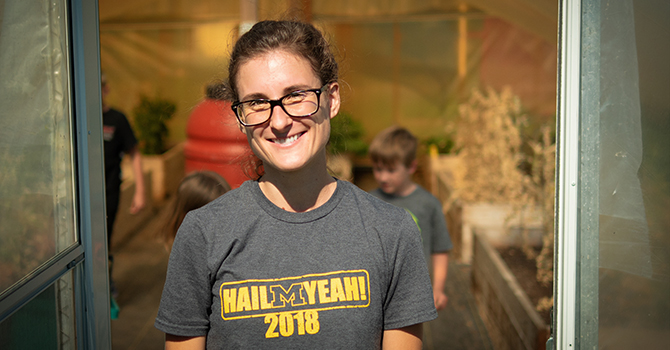 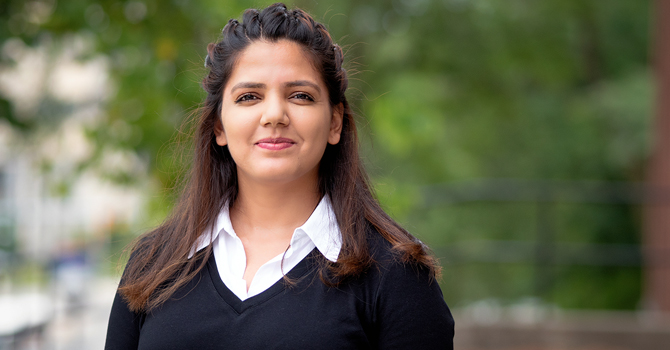 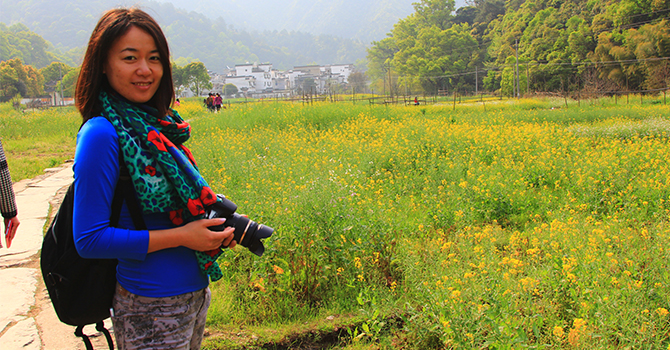 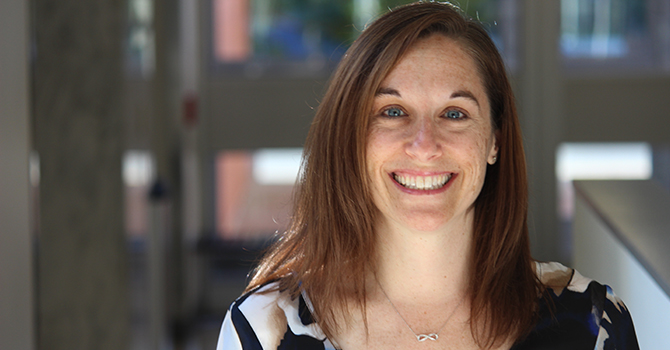 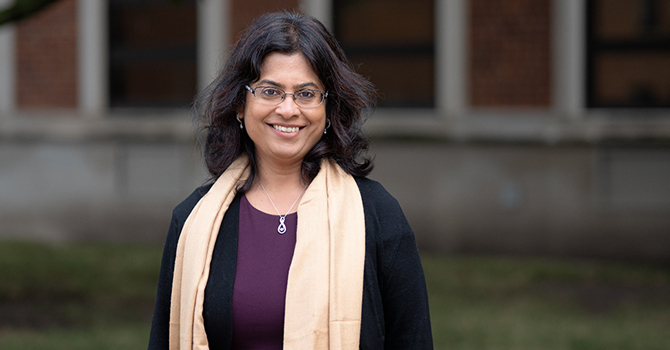 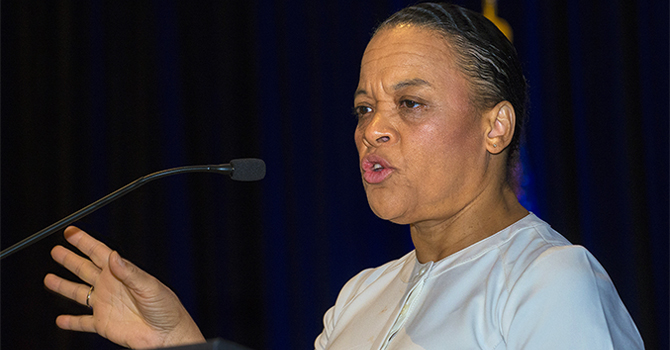