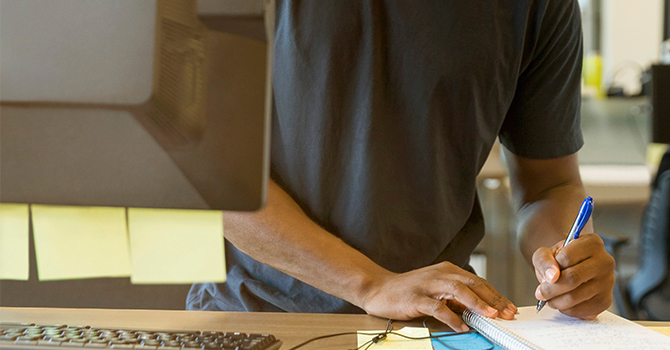 Q & A with Daniel Eisenberg

May is Mental Health Awareness Month

A national survey across hundreds of college campuses does much to paint a picture of student mental health, which can then guide campus support programming. And now the researchers behind the Healthy Minds Network want to immediately put resources into the hands of students who take that survey.

With technical expertise from the University of Michigan Office of Academic Innovation, the researchers have developed a digital tool called Sage that provides education and support to students. It allows those who take the Healthy Minds Survey to receive tailored resources based on individual needs and preferences indicated through their responses.

To date, some 300,000 students nationwide have taken the mental health survey. A trial of the tool was offered to U-M students.

They also hope to help make sense of a growing list of mobile resources, as more attention is given to the topic of mental health. The team has previously conducted research showing college students are open to receiving such resources on mobile apps, for reasons of convenience, availability and confidentiality.

Q: How does Sage work?

Eisenberg: After students complete the Healthy Minds survey, they are invited to click on a link to the Sage site. There, they are shown a curated list of mental health-related resources. The resource list is tailored based on the students' characteristics and apparent needs.

Eisenberg: For example, if a student indicates symptoms of severe depression, the suggested resource list would first display mental health services such as CAPS (U-M's Counseling and Psychological Services) and a suicide prevention hotline. If a student does not indicate any particular mental health struggles, the list would emphasize general wellness resources such as mindfulness and meditation apps. Students can also indicate on the site which types of resources they would like to browse, such as online versus in-person.

Q: How much of a problem are challenges to mental health on college campuses?

Eisenberg: Mental health is clearly one of the most important and challenging issues in college student populations. It's both a problem and an opportunity: there are lots of ways that campuses can and are addressing student mental health, and our hope is that Sage will join the growing list of effective strategies.

Q: Ultimately, will the way students use this tool also tell you, the researchers, more about mental health among students?

Eisenberg: Yes, we expect to get a lot of useful information about how students think about and use various mental health resources. For example, we will get a sense of whether and how students are becoming more interested in using online resources and mobile apps.

Q: You had the first trial, feedback and pilot testing. Who did that involve and how did it all go?

Eisenberg: Among the University of Michigan students who completed the Healthy Minds survey and were invited to check out Sage, about half of them did so. That is a pretty good start in terms of user engagement. Now we are looking at the specifics of how they used the site.

Q: When will you know if this is a success and how?

Eisenberg: The first indicator will be when a large proportion of students are not only checking out the site but actually using it to learn about and ultimately use resources. And, ultimately, the hope is that the use of resources will lead to significant increases in mental health and wellbeing.

Q: It's easy to understand how it can be an educational tool but how does it become a social one, as discussed in your proposal?

Eisenberg: For now it is mainly an education tool, and we haven't added any social component. In the future, we might consider features such as being able to see aggregate, anonymous information about what other students are saying about the resources listed on the site.