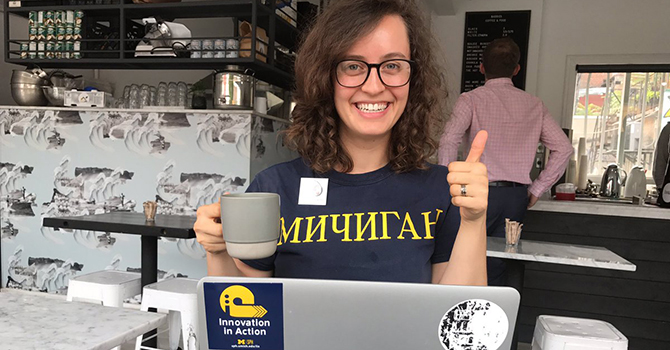 During my first week at the University of Michigan, I wasn’t quite sure what I would be doing with my life after I became a “master” in Eastern European studies and nutrition. I never thought I could call myself an “entrepreneur” or a “businesswoman.” Even today, three years after co-founding a company and (finally) selling our product, I still hesitate to use those words to describe myself.

To understand what I have in common with other people trying to create something out of nothing, I often listen to podcasts about building businesses. How I Built This, Start Up, and The Pitch are among my favorites.

After listening to the success stories and failures of dozens of innovators, I’ve identified three key strategies that we all employ.

1. Develop an obsession with your field. Don’t be afraid to get weird with it.

In early 2014, I was taking a maternal/child nutrition class with Sue Cole, lecturer of nutritional sciences at the University of Michigan School of Public Health; developing our breast pump pitch for the Innovation in Action public health entrepreneurship competition; and preparing to study human donor milk banking in various locations across the US and Brazil.

I became interested in the basic science, clinical, and entrepreneurial opportunities in the breastfeeding field. To become an expert in lactation and make significant contributions to the field, I sought out training opportunities in mammary gland molecular biology and breastfeeding medicine. That’s why I eventually joined the Physician Scientist Training Program at UC Davis.

For my doctoral research, I use animal models to study mammary gland molecular endocrinology, specifically factors that regulate lactose synthesis. In October, I completed 500 hours of clinical training to become an International Board-Certified Lactation Consultant. As part of my work as the CEO of LiquidGoldConcept, I serve as the lead investigator on a series of validation trials for our Lactation Simulation Model. I’ve learned how to develop study protocols, design curricular modules, evaluate large data sets, submit studies for IRB approval, and manage large teams of investigators.

If you aren’t yet convinced of my obsession with every aspect of the breastfeeding field, take a look at my desktop on my Mac. I have a folder labelled “Boobs,” where I collect photos of breast and nipple pathologies so I can teach my interns and Lactation Simulation Model manufacturing team what an inverted nipple or mastitis looks like.

2. Learn to effectively sift through the criticism. It’ll only make you stronger.

In 2015, I attended the Biomedical Entrepreneurship Academy at UC Davis. At the speed pitching session, I had 10 minutes to practice pitching a potential investor. After I gave my introduction—“My name is Anna, I am the CEO of LiquidGoldConcept and I’m starting the MD/PhD program at UC Davis in two months”—my potential investor pushed himself away from the table and said: “Medical school and running a company? Forget about it. You’ll never be able to do it. Just stop now.”

I wish I knew his name so that I could thank him. For the last two years, every time I’ve felt like I’ve hit a roadblock, I would think back to his smug face looking down at me and find the energy to keep going.

Over the years, I’ve learned to identify key trends in the feedback I receive so that we as a team can move toward the ideal product-market fit. As the CEO, all of the feedback—positive and negative—goes through me. While it has been emotionally exhausting to be the sieve for all the “constructive” criticism we have received over the years, I have grown tremendously as a leader, teammate, entrepreneur, clinician, and researcher. As for LiquidGoldConcept’s growth: We make (and sell!) the world’s only realistic, hands-on, comprehensive breastfeeding training tools...so, I think we’re doing something right.

3. Create your own opportunities. Start by finding brilliant, motivated people.

I’ve spent a lot of time building and learning from the LiquidGoldConcept team. I am very lucky to have come across and worked with unbelievably talented and motivated people.

I love sharing how I stumbled upon Jeff Plott, the Chief Technology Officer at LiquidGoldConcept. In January 2014, I wanted to find someone with a design background to work with the Innovation in Action team to mock up some designs for our breast pump idea. After looking at the every single graduate student portfolio in the Stamps School of Art and Design, I came across Mia Cinelli, whose style and art aligned with my vision for the pump.

Mia told me she was too busy working on her thesis, but that she had worked with someone who might be a good fit. She said Jeff was “working on his PhD in bio... medical... something... engineering.” (This is a direct quote from Mia’s email). Mia sent an introductory email that same day, and the rest is history. Without Jeff and his—well, OK, I’ll publicly admit it—genius-ness, LiquidGoldConcept would not be where it is today.

So, is it luck that I met Mia, who just happened to know about Jeff? Were the three of us in the right place at the right time? I think that the three of us sought out interesting challenges to solve, and that intrinsic drive for meaningful innovation brought us together.

What will your contribution to society be? To all students of public health, biology, medicine: Look around you. There are so many interesting and pressing problems to solve. 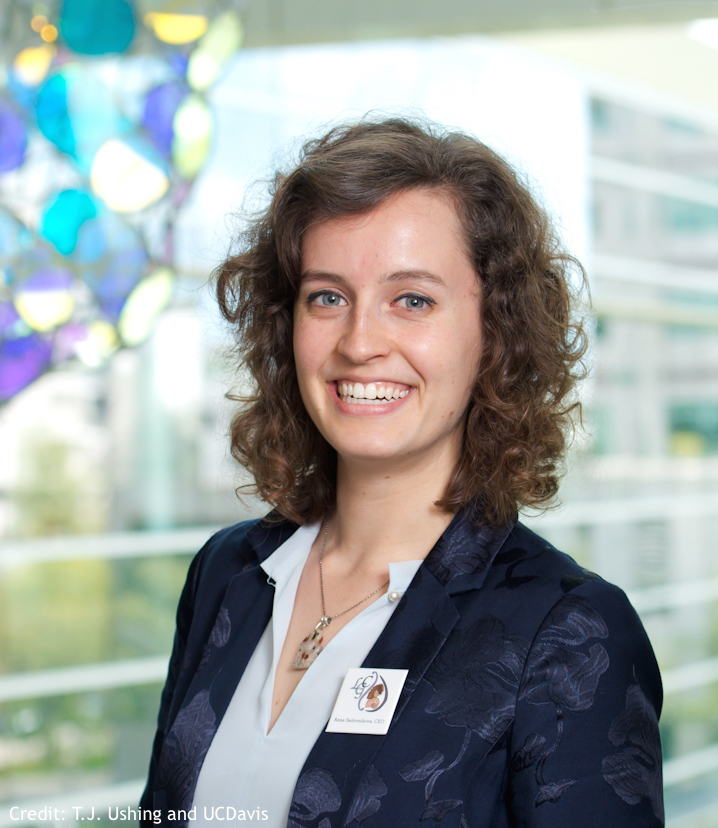 Anna Sadovnikova is a mammary gland biologist and breastfeeding medicine trainee at UC Davis and the co-founder and CEO of LiquidGoldConcept, a social impact breastfeeding education company. She graduated from the University of Michigan with an MPH in Human Nutrition and an MA in Russian, Eastern European and Eurasian studies in 2015. In 2014, as part of her University of Michigan dual-master’s research, she studied human milk banking in Brazil. She was shocked that Brazilian providers and parents, unlike her colleagues and patients in the US, knew how to alleviate breastfeeding problems with hands-on techniques. While in medical school, Sadovnikova saw the value of learning how to counsel and examine patients using medical simulation and standardized patients. These hands-on, interactive approaches were key to developing her confidence in her own performance and ability. Sadovnikova realized how valuable it would be to have a comprehensive breastfeeding hands-on training tool (a Lactation Simulation Model) for parents and health providers. Her interprofessional academic experience, translational research background, and personal insight into curriculum development and clinical skills training uniquely position her to lead LiquidGoldConcept’s effort to empower health professional students, practitioners, and their patients with breastfeeding management skills.